60% of Pasadena Voting Residents Said Yes to Cannabis Dispensaries - Would Voters in Sierra Madre do that?

The City Council in Sierra Madre is on record as being highly opposed to opening any pot dispensaries anywhere within the 3 square miles of the Foothill Village. They just ain't into it, and each of them has clearly said so. Adamantly and in no uncertain terms.

However, the Pasadena City Council also wasn't digging on the pot shop idea, despite statewide voter approval for such places, and pretty much shut down any attempts to open legal dispensaries in their significantly larger city. Like many elected officials they too didn't want to be perceived as being quite that groovy. Not that there was ever very much danger of that.

Which is when some adventurous Pasadena residents decided to take things into their own hands and put a measure on the ballot that, when approved by the voters, would electorally subvert the wishes of the Rotten Rose's legislative body.

There were a couple of devious machinations by Pasadena City Hall along the way, but when all was said and done the resulting Measure CC passed with just over 60% of the vote last week. Which to me was a surprisingly large number.

In an article called Pasadena voters approve marijuana dispensaries in city (link), here is how the Star News laid this story out. 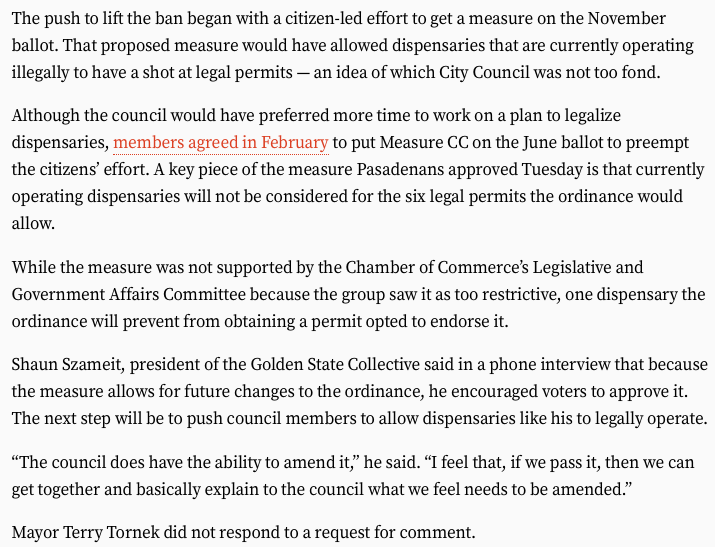 So here his my question. What if a similarly inspired group of concerned voting residents in Sierra Madre decided that they would like to see a marijuana store or two downtown somewhere, and put a similar measure on the ballot? Certainly there would be numerous open locations in town to choose from.

This ballot initiative would not happen just because some people enjoy getting stoned, though there is that. But primarily because a lot more people in town than you are likely aware use marijuana for pain relief and other medicinal purposes. Even some of the folks residing inside that large hulking building across the street from City Hall.

In a Pasadena Star News article titled "Sierra Madre to ban marijuana sales and shops but may reconsider delivery" (link), resident John Lopez made his case for a cannabis dispensary in town.

A ballot initiative like that one in Pasadena could prove more popular here than many might first believe. I'd bet even the Chamber of Commerce would get into it once they get used to the concept. I am pretty certain most of them are familiar with both the product and its effects.

And who knows, perhaps over time they might even take credit for the idea.