One Carter: Get Ready For A Whole Lot Of Happy Talk

As you will see, that is if I write this correctly, whenever the One Carter debacle reemerges from an extended period of legal negotiation, much radiant joy emanates from City Hall.

The reason for all of the happy talk is they have a bridge to sell you. Or at least a new housing development, much of it Tuscan in design. Via Duarte. Or Irwindale. Or whatever San Gabriel Valley town the current bad architects might be hiding out. As they probably should.

The conversation we are being asked to have right about now has to do with the level of ecstatic peace you personally feel over the city having avoided an expensive lawsuit with some developer. As opposed to the equally expensive legal negotiations that just wrapped up somewhere. You know, in a place where you were definitely not wanted, or invited.

Add these two revelatory yet legally consequential events together and you're talking about some real money. Actually, they're both real money. Each by themselves.

Here are a couple of articles from the Pasadena Star News that probably should have been cheered down a little by the reporters who wrote them. But they didn't do that because their mission was to sell you something, which they were far too happy to do. This first shiny object comes to us from way back in 2009.

The developer filed eight lawsuits against the city in response, but lost both properties earlier this year through foreclosure. The new owner, Capital Source, has signaled it is more open to settlement talks with the city.

Capital Source indicated it plans to sell off the lots individually once the litigation ends, officials said.

“These new owners have given us a lot of hope to believe there is light at the end of the tunnel,” Councilman Joe Mosca said.

The proposal calls for compromises on both sides as to how many residential units will be allowed and what zoning restrictions the individual lots would fall under.

It was peace in our times. Nobody could ever lay it on thick quite like Joe Mosca. Of course, nothing was really settled. Except all those legal bills, of course. Today Joe is working the folks down in Encinitas, and you know what? The big topic there is new housing development (link).

This next Star Newser emerged on the remains of recently hewn trees in 2015. It too has a cautiously frothy tone, so you just might want to sing along.

At the meeting, council members will decide whether to approve or deny a Hillside Development Permit and Conditional Use Permit for the property located at 610 Baldwin Court. Approval of the permits would allow the applicant, CETT Corporation, to construct a two-story, 3,125 square foot single-family residence on the lot, a development which some residents and council members say would change the aesthetics of the community.

There is a lot of history to this particular site, as it was established by the City’s founding father Nathaniel C. Carter. Formerly known as One Carter, Aguilar said houses built in the Stonegate subdivision have to abide by Hillside Management Zone guidelines, a set of unique regulations.

Final decisions, indeed. You have to laugh. Well, OK, you don't really, but it might help. Just ask Nathaniel C. Carter. His life wasn't all fun and games either, you know.

It now is 2018, and this third episode in near quadrennial, though joyous, futility doesn't come from the Pasadena Star News. They don't have as many reporters as they used to, and we might not be the beneficiary of their coverage this time.

But trust me, you can't hold back on a level of excitement this large for long, and today it comes from the appropriate City Hall staff report for next Tuesday's City Council meeting. Click here to view all of it. 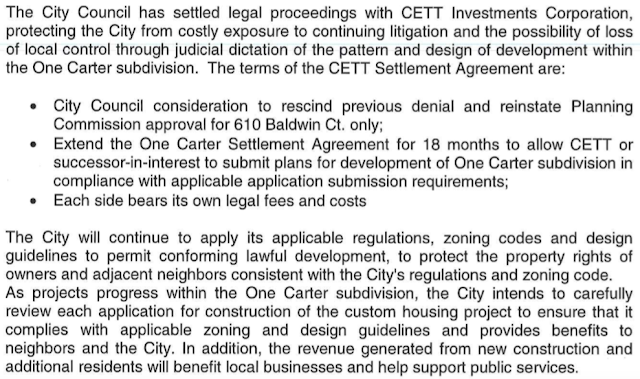 So here is my question. Who actually won something here?