First I would like to congratulate Pasadena Mayor Terry "One Term" Tornek for maintaining his usual respectful silence throughout this incident. It is this kind of leadership that has helped bring needed publicity to a town that sees itself as occupying a very special place in this world.

As usual One Term Terry has been nowhere to be found on this kind of an issue, and I am sure that a man with as busy a schedule as his spent talking to McCondo developers, real estate professionals, corporate executives looking for tax breaks and Rose Parade passes, along with other concerned stakeholders, finds this approach to be both comfortable and convenient.

However, around the world today Pasadena is once again a topic of heated discussion for being a city having some rather unfortunate problems with race. The Pasadena Star News has an article all about that today called "Activists protest outside Westin Pasadena after video of allegedly racist encounter goes viral." I am not certain what is alleged about it, though. Link to the Star News here.

The part about the travails of the Westin Pasadena's hotel manager, a guy with the unfortunate name of Carl Sprayberry, is particularly enlightening. Talk about your corporate personality type having a really bad day at work. Well deserved, I might add.

But since there are so many articles out there to choose from, I've decided to cite Isle of Wight Radio's reporting today. It is a little more visceral and down to earth, plus it gives you an idea of just how badly the Rotten Rose is once again being perceived by those from beyond the smoggy confines of the San Gabriel Valley. 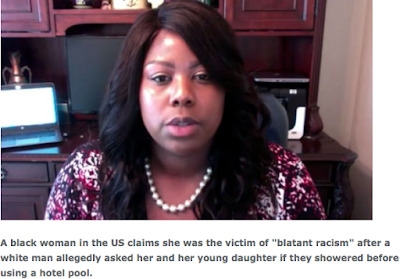 Racism row after black family asked by white man if they showered before swim (Isle of Wight Radio link): Carle Wheeler said she and her five-year-old daughter were accosted by the man as they swam at the Pasadena Westin Hotel in California, while several white people nearby were left alone.

She alleged that he warned them that people carry diseases into the pool before approaching the pair a second time, claiming to work for the health department.

After hotel staff arrived at the scene, Ms Wheeler said she confronted the man on what appeared to be blatant racism. A video of the row that was posted on Facebook has been viewed more than 3.5 million times.

Ms Wheeler said: It’s sad that I had to explain to my beautiful little five-year-old brown-skinned girl why in 2018 a white man would think it’s OK to ask a little girl and her mom if we showered our presumably dirty black skin before entering a swimming pool.

She added that the man continued to taunt my little girl as she was being escorted away from the mayhem.

Ms Wheeler claimed the group of white people at the pool corroborated her claims, but the hotel manager allowed the man to walk away.

She said: It’s just sad that in 2018 we are still dealing with these issues and still having to teach our children things that people had to teach their children in the 50s and 60s. Nothing has changed. It’s one thing when it happens and you see it on the news, you see it happen to somebody else. When it knocks at your door, it’s a hurtful thing.

Ms Wheeler describes herself as divorced single mother who works as a software developer. I am not trash, she said. I am not dirty. I’m black, educated and proud.

In a statement to the Pasadena Star News, the hotel said: The Westin Pasadena strives to provide a welcoming environment to all individuals. Harassment on any basis is not tolerated. We are continuing to investigate this serious matter and deeply regret that one of our guests experienced this type of behaviour.

The man, who has not been named, has not commented publicly on the incident.

Here is some of the video footage mentioned in Isle if Wight Radio's reporting.


If anybody knows this pathetic dude, let me know who he is, would you? So far he remains unidentified, and I would love to be the newser to drop the dime on him.