Mod: Here is how Dana Milbank put it. "It was as though Nancy Reagan had given a "Just Say No" speech while her husband honored the occasion at the White House by snorting cocaine during a live news conference." So is Melania trolling her husband?


Melania decries 'destructive' social media amid Trump Twitter attacks (The Guardian link): Melania Trump has issued a warning over the destructive power of social media on the same day her husband used Twitter to attack John Brennan as “the worst CIA director in our country’s history” and a political “hack”.

The US first lady was speaking at a federal conference on cyberbullying in Maryland.

Opening the Federal Partners on Bullying Prevention summit, Melania Trump said: “Let’s face it: Most children are more aware of the benefits and pitfalls of social media than some adults.”

“In today’s global society, social media is an inevitable part of our children’s daily lives," she said. "It can be used in many positive ways, but can also be destructive and harmful when used incorrectly.”

Her comments come as the US president continued to fire salvos against his perceived enemies on Twitter, writing that Robert Mueller, the man leading the investigation into Russian interference in the election, was “disgraced and discredited”.

Melania Trump did not directly mention the president and his aggressive use of Twitter to berate his foes and call them names. 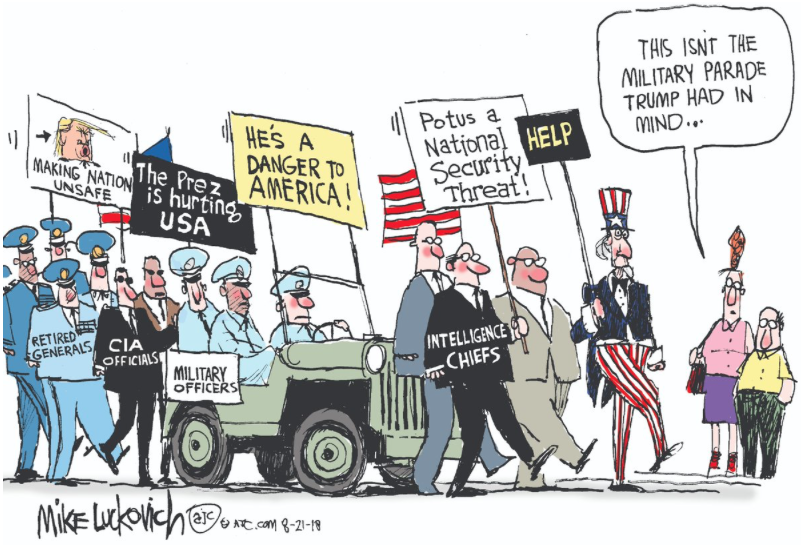 As Trump Goes on a Twitter Rampage, Melania Trump Announces a Solo Trip to Africa (The New York Times link): Under the banner of her “Be Best” campaign, Melania Trump, the first lady, told a group of cyberbullying prevention experts on Monday that social media “can be destructive and harmful when used incorrectly.”

Just after she spoke, President Trump unleashed a barrage of tweets in which he called the former director of the C.I.A. a “hack” and mocked the effectiveness of the Justice Department, among other digital insults. Later on Monday, Mrs. Trump added to a day of dissonant messaging from the Trump White House when her office announced a solo trip for the first lady this fall to Africa — a continent whose countries and citizens her husband has disparaged with coarse language.

Mrs. Trump, whose policy director left the White House a few weeks ago, has kept a light public schedule in promoting her child-focused campaign since she launched it in May. Her visit to the Federal Partners in Bullying Prevention session, held at the Health Resources and Services Administration in a Washington suburb, was one of the more visible efforts that Mrs. Trump has made on behalf of the campaign.

“In today’s global society, social media is an inevitable part of our children’s daily lives,” Mrs. Trump said, reading from prepared remarks. “It can be used in many positive ways, but can also be destructive and harmful when used incorrectly.”

The first lady has stuck with cyberbullying prevention as a signature issue despite Mr. Trump’s combative posture on Twitter — he has attacked at least 487 people, companies or institutions since declaring his candidacy for the presidency. His targets have ranged from the department store Macy’s to Robert S. Mueller III, the special counsel investigating the Trump campaign’s ties to Russia.

sierramadretattler.blogspot.com
Posted by The Moderator at 5:10 AM