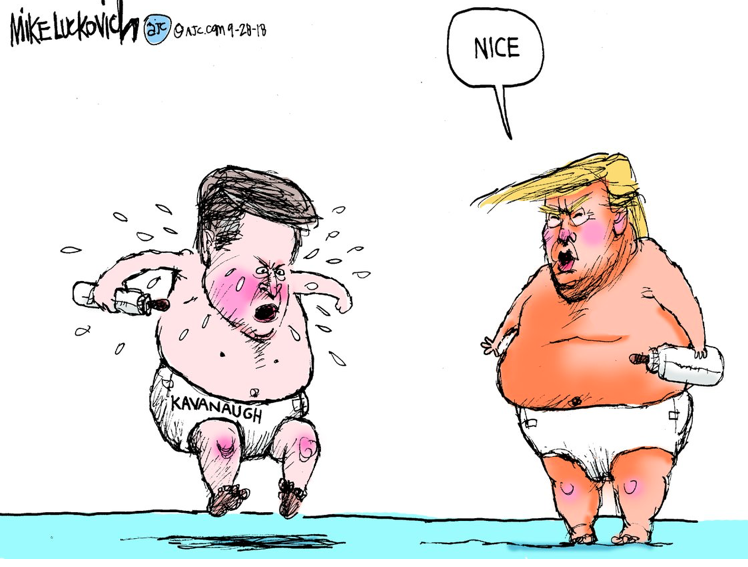 Mod: One thing that jumped out for me is how frightened the Republicans are over the prospect of an FBI investigation into the allegations against Kavanaugh. If the guy is innocent as he claims, what does he have to hide? Instead he opted for the Clarence Thomas "tantrum defense." The American Bar Association, who until now had given Kavanaugh a clean bill of health, is now calling for just such an investigation. It seems that they were not very impressed by what they saw from the nominee yesterday.

American Bar Association: Delay Kavanaugh until FBI investigates assault allegations (CNN link): The American Bar Association is calling on the Senate Judiciary Committee to halt the consideration of President Donald Trump's Supreme Court nominee Brett Kavanaugh until an FBI investigation is completed into the sexual assault allegations that have roiled his nomination. In a strongly worded letter obtained by CNN Thursday, the organization said it is making the extraordinary request "because of the ABA's respect for the rule of law and due process under law," siding with concerns voiced by Senate Democrats since Christine Blasey Ford's decades-old allegations became public.

"The basic principles that underscore the Senate's constitutional duty of advice and consent on federal judicial nominees require nothing less than a careful examination of the accusations and facts by the FBI," said Robert Carlson, president of the organization, in a Thursday night letter addressed to Senate Judiciary Chairman Chuck Grassley and ranking Democrat Dianne Feinstein.

"Each appointment to our nation's Highest Court (as with all others) is simply too important to rush to a vote," Carlson wrote. "Deciding to proceed without conducting additional investigation would not only have a lasting impact on the Senate's reputation, but it will also negatively affect the great trust necessary for the American people to have in the Supreme Court."

The comments are striking because the organization gave Kavanaugh its highest rating of unanimous, "well-qualified" for the Supreme Court. Kavanaugh himself touted that rating at Thursday's emotionally-charged hearing where he denied Ford's sworn testimony that he attempted to rape her when they were teenagers.

Kavanaugh noted he was "thoroughly vetted" by the ABA.

"For 12 years, everyone who has appeared before me on the D.C. Circuit has praised my judicial temperament," Kavanaugh said Thursday. "That's why I have the unanimous, well qualified rating from the American Bar Association."

In the letter, the ABA president says the Senate must remain "an institution that will reliably follow the law and not politics," saying a "thorough FBI investigation will demonstrate its commitment to a Supreme Court that is above reproach."

Republicans have rejected Democratic calls for an FBI probe and are planning to hold a committee vote Friday before moving the nomination to the floor this weekend.


sierramadretattler.blogspot.com
Posted by The Moderator at 5:15 AM