So the City Hall types were being hounded by Preserve Sierra Madre for not properly sharing information about the many construction projects going down in Sierra Madre. Even though they had promised they would, sadly those at least superficially friendly folks on the other side of the cash counter were not being quite as forthcoming as advertised.

The big news here is they have now finally relented on this matter. The Planning Department has come up with a new format for their list of ongoing projects, quite different from the old one that had mixed in a lot of superfluous stuff with the issues of real concern. Here is the new version. As you can see, there is a whole lot going on. 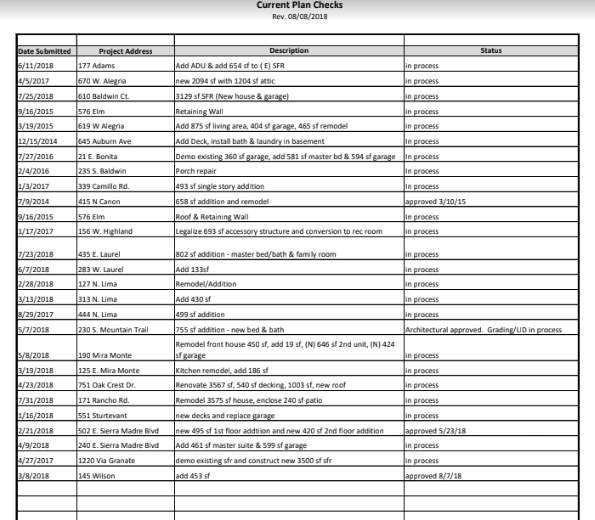 Now you might be wondering why all of these projects are happening right now. And if that really is all of them, since anecdotal evidence would certainly indicate otherwise.

You would be right to do so. It does seem to be quite a building boom, one going on in a town that is supposed to be deeply concerned with preventing the place from being turned into an only marginally quainter version of Arcadia.

The answer, of course, is money. The city is monetizing everything. The #1 priority for City Hall right now is dealing with its very large debt problem. Particularly debt caused by its vast CalPERS exposure and bad bond deals.

No stone is being left unturned in that effort, as they say. The City Council has demanded action. And though there is an always generous amount of lip service being paid to preserving the old place, that isn't what is really driving the happy bus.

Which means that literally everything is for sale at City Hall. It's a virtual permit mill down there these days. And judging by all of those green fences, business is very good.