Will the City of Sierra Madre Submit a Near "No Growth" Report to SCAG?

Yesterday one of the Tea Party losers that plagues this site on an almost daily basis was complaining that preserving Sierra Madre from mansionization and other forms of predatory and unwanted development is tantamount to supporting "no growth." A ridiculous and largely content-free usage for sure, but then you need to consider the source.

This individual was then asked to describe what he feels "growth" in a built-out town like Sierra Madre might be, but per usual the question wasn't answered. Instead he fell back on pathetic insults and other juvenile nonsense, much of which couldn't be cleared here due to language. Just another day of babysitting one of the village idiots.

However, it would appear that Sierra Madre really isn't growing very much. Which is fine, change isn't always a good thing. If you need an example, take a ride over to Arcadia and look at what happened there. It is a place where you will see that the word "growth" can be used oxymoronically.

Tonight the City Council will be reviewing a report that the city is required to send to the planning fantasists at SCAG. Here is how the choices being offered to the not so Fab Five are described in the staff report (link). 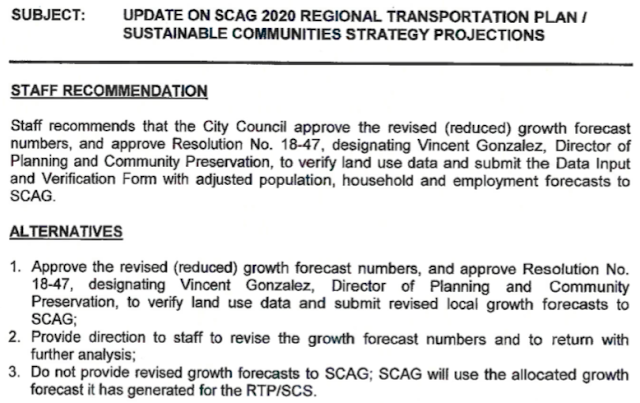 Interesting, right? A minimal growth town where real estate prices are through the roof is now experiencing nearly no growth. This according to City Hall. Yet homeowners are getting rich as their property values continue to rise at robust rates. Driven because Sierra Madre is a town that has not enslaved itself to uncontrolled growth, but instead has remained true to quality.

So how is that a bad thing, and why would you want to mess with it?

Mod: The Tea Fools are whining up a mighty snot storm over this one.

Conservative activists: Trump was ‘tricked’ into Calif. endorsement (Politico.com link): President Donald Trump’s surprise move to issue an endorsement in California’s only Republican-on-Republican House race has stunned GOP grassroots activists who say he’s been “tricked” into siding with the “the swamp” against his loyal #MAGA base.

Trump took to Twitter this week to endorse incumbent GOP Rep. Paul Cook — who represents one of California’s most conservative congressional districts — over former Assemblyman Tim Donnelly, a Tea Party favorite and co-founder of the California Minutemen, an anti-illegal immigration border watch group.

A loyal supporter of Trump in a state where the president’s approval ratings hover near 38 percent, Donnelly earlier this year led a crowd of several hundred #MAGA activists to the border to cheer on the president during a trip in which Trump viewed border wall prototypes — an effort to counter widespread demonstrations by immigration advocates and Democratic activists in the solidly blue state.

Trump’s move hasn’t gone over well with many of California’s most conservative grassroots loyalists, who note that Donnelly more than a decade ago gained a following among the far right as a firebrand activist who helped form the Minutemen group. The author of a recent conservative call to action book entitled “Patriot Not Politician,’’ Donnelly made national news leading hundreds to the San Diego border to construct a “border wall” against illegal immigration in 2006 — years before Trump ever used the issue as a campaign lynchpin.

“Tim Donnelly was Trump before Trump,’’ said Ed Riffle, a longtime GOP activist from Sunnyvale and a member of the California Republican Central Committee. “He was the guy who said we have to enforce the wall. It got him into politics.’’

The move, he said, underscored the rift between California GOP’s conservative activist base and its more mainstream funders — a division that some say has contributed to the party’s withered voter registration in a state where it has now sunk to third-party status.

2 new polls give Trump and Republicans nightmare signs for the midterms (Business Insider link): President Donald Trump is rapidly losing favor among independent voters and has a low approval rating in general despite a strong economy, two new polls show, providing fresh warning signals for the president and the Republican Party ahead of the midterm elections.

A new CNN poll found Trump's approval rating at just 36% and put his approval among independents at 31%, a new low and dropped all the way from 47% last month.

Recent reports have suggested independents could comprise up to 30% of the electorate in this year's midterms, meaning they could make or break the GOP's grip on its majority in Congress in November.