Mod: The folks over at the White House are not very happy about this. Then again, the not entirely brilliant Donald Trump did want to involve himself in the rap world, so there is that. The Kanye West fallout continues.

T.I. posts video that shows a Melania Trump look-alike stripping, drawing ire from the first lady’s spokeswoman (The Washington Post link): Melania Trump recently called herself “one of the most bullied people in the world,” and a new video short from T.I. featuring a nude Melania look-alike dancing suggestively — okay, way more than “suggestively” — on the desk in the Oval Office probably didn’t change her mind. “How is this acceptable?” Melania’s spokeswoman Stephanie Grisham tweeted Saturday evening, adding the hashtags “#disgusting” and “#boycottT.I.”

The fuss began when the rapper tweeted out Friday a promotional video for his new album “Dime Trap.” The clip is only a minute long, but it packs a lot of shock into those brief 60 seconds.

It opens with real footage of President Trump walking alone to a helicopter. Dubbed over the video is a voice-over: “Melania Trump did not go to Mar-a-Lago with the president this weekend, which has a lot of people wondering.”

The chopper takes off, and the scene shifts to T.I., clad in a sharp blue suit, wandering around the Oval Office. He stares out the window for a moment, then walks to the desk and places his hand on it, as if the weight of the world is on his shoulders.

Then, a Melania look-alike struts in, wearing only heels and a green jacket emblazoned with the words “I really don’t care, do u?” — the same words on a jacket the actual Mrs. Trump wore on a visit to the U.S.-Mexico border, where migrant children were separated from their families because of the Trump administration’s immigration policies.

As T.I. lights a cigar, the Melania look-alike drops her jacket, revealing that she is wearing nothing underneath. She then begins dancing, climbing on the desk and tugging at T.I.'s tie.

The video ends with a montage of scenes, including Trump riding around in a golf cart wearing a MAGA hat, as well as the Melania look-alike spray-painting red X’s over the eyes of a portrait of Trump. Finally, the video cuts to a black screen with text promoting T.I.'s new album.

The tweet that accompanied the video had a simple message: “Dear 45, I ain’t Kanye.” Superstar Kanye West recently visited the White House for a bizarre conversation with Trump.

Mod: I guess the First Lady's spokespersons will try and make their case about this. However, the T.I. video is reminiscent of some of Melania's own modeling work. 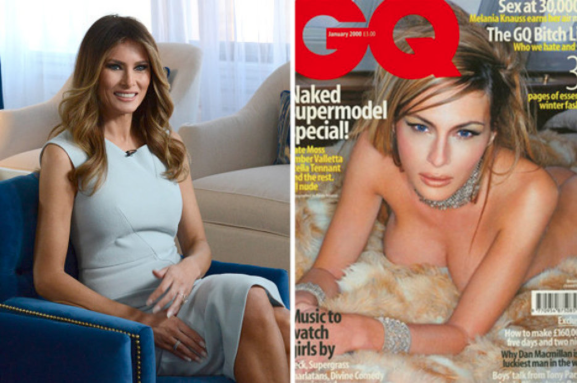