“Our Jewish community is not the only group you have targeted,” the group wrote. “You have also deliberately undermined the safety of people of color, Muslims, LGBTQ people, and people with disabilities. Yesterday’s massacre is not the first act of terror you incited against a minority group in our country.”

Trump was fiercely criticized after he failed to condemn white supremacy and asserted that there is “blame on both sides” after last year’s white supremacist rally in Charlottesville, Va. The group also said Trump is not welcome in the city until he also stops targeting minorities, immigrants and refugees.

The president has “spread lies and sowed fear about migrant families in Central America,” the group wrote.

“The Torah teaches that every human being is made b’tzelem Elohim, in the image of God. This means all of us,” the leaders wrote. “In our neighbors, Americans, and people worldwide who have reached out to give our community strength, there we find the image of God.”

Mod: Here is the entire text of the that was letter sent to Trump. 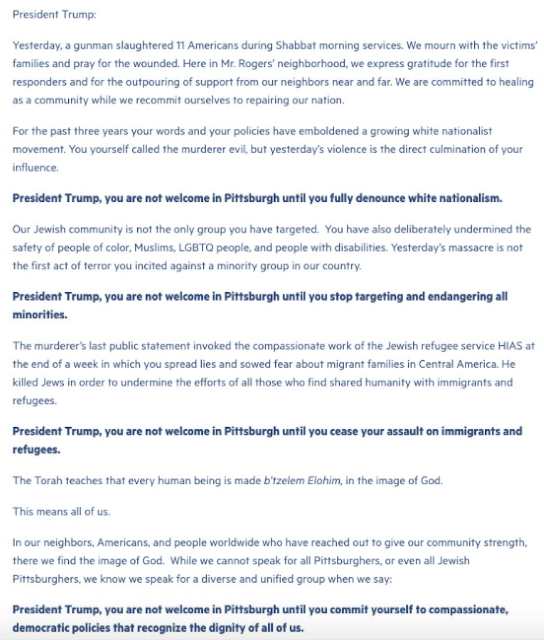 'He is not welcome here': Thousands support Pittsburgh Jewish leaders (Washington Post link): More than 16,000 people have signed an open letter to President Trump from the leaders of a Pittsburgh-based Jewish group who say the president will not be welcome in the city unless he denounces white nationalism and stops “targeting” minorities after a mass shooting Saturday at a local synagogue left 11 dead.

The letter, which was published and shared on Sunday, was written by 11 members of the Pittsburgh affiliate of Bend the Arc, a national organization for progressive Jews focused on social justice, following what is being called the deadliest attack on Jews in U.S. history. The shooting at Tree of Life synagogue also left several people injured, including law enforcement. As of early Monday morning, the letter had 16,533 signatures.

“For the past three years your words and your policies have emboldened a growing white nationalist movement,” the Jewish leaders wrote. “You yourself called the murderer evil, but yesterday’s violence is the direct culmination of your influence." 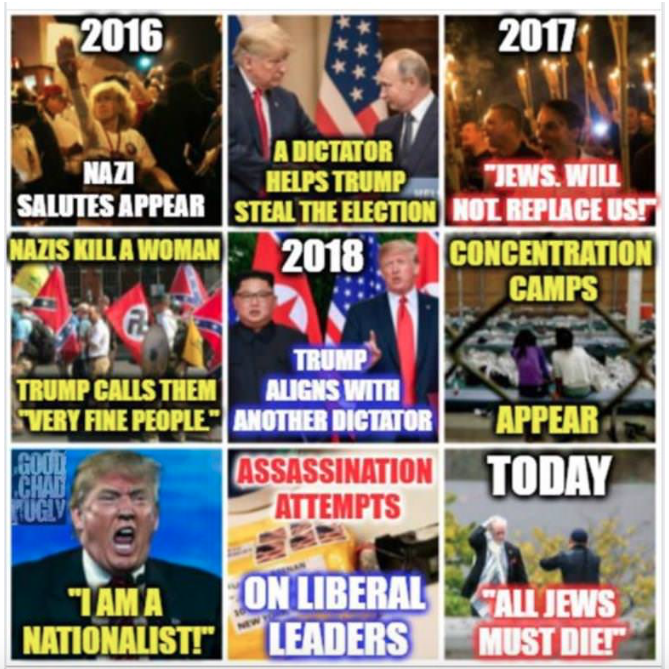