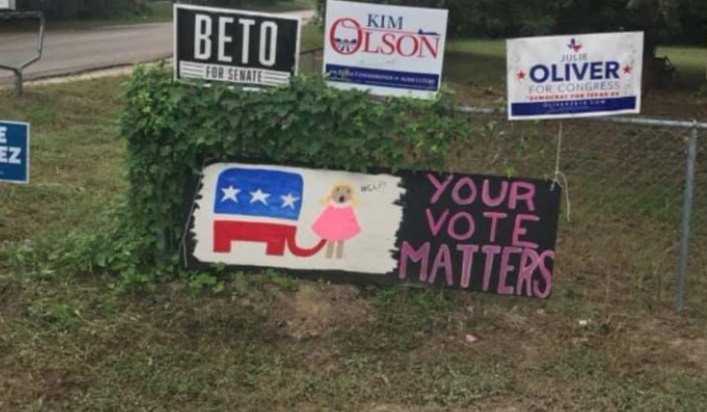 Mod: It looks like a tender Texas snowflake named Sid Miller got his feelings hurt.

The sign in question was homemade and didn’t offer support for any particular candidate. Rather, the sign–hand-painted in red, white and blue–featured an elephant with its trunk up a woman’s skirt. The woman in the painting had word bubble with the word “Help.” The sign was captioned, “Your vote matters.”

Current Texas Agricultural Commission Sid Miller took note of the sign and posted about it on Facebook. In a post, Miller made an unsubstantiated allegation that the sign was an attempt to depict the daughter of Supreme Court nominee and alleged attempted rapist Brett Kavanaugh.

Local police then visited Stanford’s home. No arrest occurred but the sign was taken by police. “Police told me to remove the sign or they would take it and would arrest me,” Stanford said. “So I let them take the sign.”

Mod: This could be yet another case where a dirt dumb Trump supporter has claimed that the First Amendment is a threat to the United States Constitution. Oh, and it isn't like Hog Eatin' Sid doesn't have some legal problems already.

“The governor believes these allegations of misuse of taxpayer dollars warrant a thorough investigation by the Texas Rangers," said John Wittman, a spokesman for Abbott.

On Wednesday, the Texas Department of Public Safety confirmed that the agency's Texas Rangers are conducting an investigation into whether Miller abused his position as commissioner by having the state pay for two trips — one to Oklahoma and another to Mississippi, in February 2015. Media reports have indicated Miller may have traveled for personal benefit.

Mod: Lock his big butt up.

sierramadretattler.blogspot.com
Posted by The Moderator at 8:30 AM