The alt-right is devastated that Taylor Swift endorsed a Democrat

Mod: Most Neo-Nazis are snowflake fanboys at heart, and apparently Taylor Swift was their very special sweetheart. So imagine their bitter tears when it was announced that she will be voting for Democrats this fall, and not the party that best represents their agenda, the Republicans.

Swift broke her silence on party politics last night in a lengthy Instagram post, in which she announced that she would be voting for two Democrats in Tennessee in the upcoming American mid-term elections. “In the past I’ve been reluctant to publicly voice my political opinions,” she wrote before going on to condemn Republican candidate for Senate, Marsha Blackburn, “but due to several events in my life and in the world in the past two years, I feel very differently about that now.”

The singer has previously remained almost silent on politics, to the extent she has been the subject of widespread criticism for not publicly denouncing the views of the far-right (especially Donald Trump), for not coming out in support of Democratic candidates, and remaining neutral during political elections for her entire career.

“Goodbye Tay”, “They took her from us”, “She was supposed to be our girl! Why did she break our hearts” are just a few of the hundreds of posts that have poured in over the last 12 hours from hard-right, alt-right, and neo-Nazi 4chan users stunned by the loss of their Aryan poster girl. Users are so shocked that many are hypothesising that she was paid to do this and her statement was ghost written, parsing out the message to argue that it linguistically didn’t match her usual style. “Ever notice how every celebrity seems to be reciting the exact same script,” one user posited. “That looks ghostwritten.” “All PR nonsense,” wrote another, “She just doesn’t want to be labelled as a white nationalist. Probably got paid to say all this.”

Taylor Swift has been an alt-right icon since her first record dropped; her blonde hair and blue eyes made her a magnet for neo-Nazi fandom. Her legal team has had to legally request bloggers to stop sharing her pictures and lyrics alongside Hitler quotes. She was also the inspiration of the now disappeared “Taylor Swift for a Fascist Europe” meme page (which accrued 20K likes), and her picture is plastered all over online Aryan fan boards on sites like Reddit.

In a broadly piece from 2016 entitled “How Taylor Swift Became A Nazi Idol”, Mitchell Sunderland wrote, “Every demographic chooses a pop icon. Gay men worship Cher, black women love Beyoncé, and neo-Nazis worship Taylor Swift.” The piece goes on to speak to a writer of the The Daily Stormer blog, Andrew Anglin, who explains that Swift is a “pure Aryan goddess” and “Athena reborn” and argues that Taylor Swift was secretly a Nazi, but was just waiting for Donald Trump to be elected to say so.

While many of Swift’s fans will be rejoicing after this news, there’s one sub-section now in full mourning. Now the alt-right will have to take time to refill the spot in their white arsenal after the fall of their original “Aryan princess”. 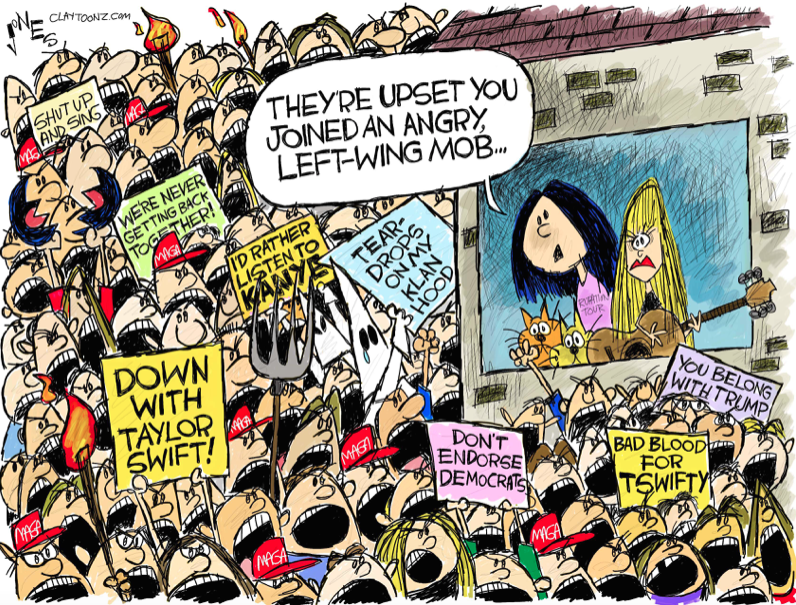 Mod: The alt-right is apparently filled with extremely pathetic people.

"We are up to 65,000 registrations in a single 24-hour period since T. Swift's post," said Kamari Guthrie, director of communications for Vote.org.

For context, 190,178 new voters were registered nationwide in the entire month of September, while 56,669 were registered in August. In Swift’s home state of Tennessee, where she voiced support for two Democratic candidates running in this year's midterms, voter registrations have also jumped.

"Vote.org saw [Tennessee] registrations spike specifically since Taylor's post," Guthrie said. The organization has received 5,183 in the state so far this month — at least 2,144 of which were in the last 36 hours, she said, up from 2,811 new Tennessee voter registrations for the entire month of September and just 951 in August.

Guthrie said the site had also seen a big jump in the number of visitors since Swift's post, with 155,940 unique visitors in the last 24 hours — second only to the number of people who visited on National Voter Registration Day on Sept. 25 when there were 304,942 unique visitors. (The average daily user count for the site is 14,078 in 2018.)

CNN poll: Democrats are fired up and maintain a strong 2018 lead (CNN link): Four weeks out from Election Day, Democrats remain well ahead of Republicans in a generic ballot matchup, with 54% of likely voters saying they support the Democrat in their district and 41% backing a Republican, according to a CNN poll conducted by SSRS. This is the widest margin of support for Democrats in a midterm cycle since 2006, when at this point, the party held a whopping 21-point lead over Republicans among likely voters. That's also when Democrats seized control of the House from Republicans, making Nancy Pelosi speaker

This year, Democrats' enthusiasm about their congressional vote has increased and 62% now say they're extremely or very enthusiastic to vote, up seven points since September among Democrats and Democratic-leaning independents. Among Republicans and Republican leaning independents, enthusiasm has remained relatively steady, going from 50% in September to 52% in the most recent poll.

Democratic enthusiasm this year is more intense than it has been in previous midterm cycles, which typically engage voters less than presidential years. The 40% who call themselves "extremely enthusiastic" is the highest share to say so in a midterm election cycle since CNN first asked the question in 2009.