The MAGA Bomber: Inspired by the incendiary political rally ranting of President Trump?


Mod: Is a coincidence that just about everyone this so-called president has repeatedly attacked at his nationalist party rallies was sent a pipe bomb by the MAGA Bomber? I for one certainly don't believe so. The MAGA Bomber has probably dreamed often of the praise he would receive from Trump for carrying out what he believed are his wishes.

Steve Schmidt, the former GOP political operative who helped manage the presidential campaigns of both George W. Bush and John McCain, spelled it all out in a series of three Tweets yesterday. I think he pretty much nailed it. 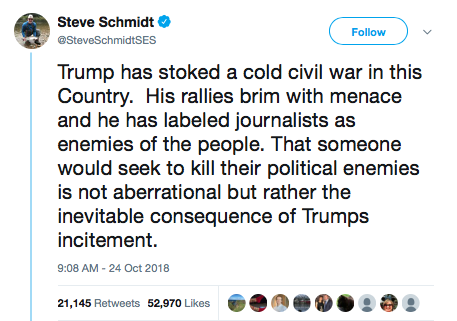 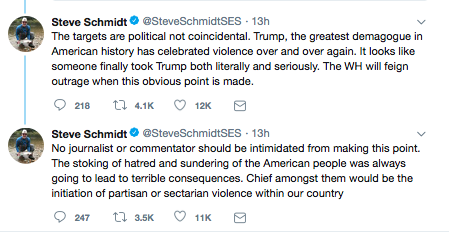 Trump squanders chance to lead after day of fear (CNN link): Don't expect Donald Trump to repent for heating America's politics to a bitter boiling point, despite a day that could have turned into a tragedy after an unknown suspect mailed bombs to the President's favorite targets.

Trump did just about the bare minimum expected after the attempted attacks using improvised explosives on two of his predecessors, several other prominent political critics and the New York offices of CNN. He called for national unity, promised to bring those responsible to justice and warned that political violence was an "attack on our democracy itself."

But there was no public acknowledgment that there can be consequences to the nation's most conspiratorial rhetoric and demagoguery -- violent, dehumanizing language he himself has spread as he lashes out at his opponents and whips up his supporters.

Characteristically, he undermined his scripted invocations of unity with fresh attacks of his own, implicitly blaming people who criticize him, the media and Democrats for the nation's dangerous political divides. He kept up the attacks Thursday morning, tweeting that "a very big part of the Anger we see today in our society is caused by the purposely false and inaccurate reporting of the Mainstream Media." In effect, the President has chosen not to rise above the tumult or even console or counsel those who opposed him.

He did not mention the victims by name. Or give any indication that he is concerned that some people might see his flaming rhetoric as a spur to violence.

Trump's response to Wednesday's events was a reminder of the gap between presidential expectations and performance that has often been evident in his response to grave national moments, crises and natural disasters.