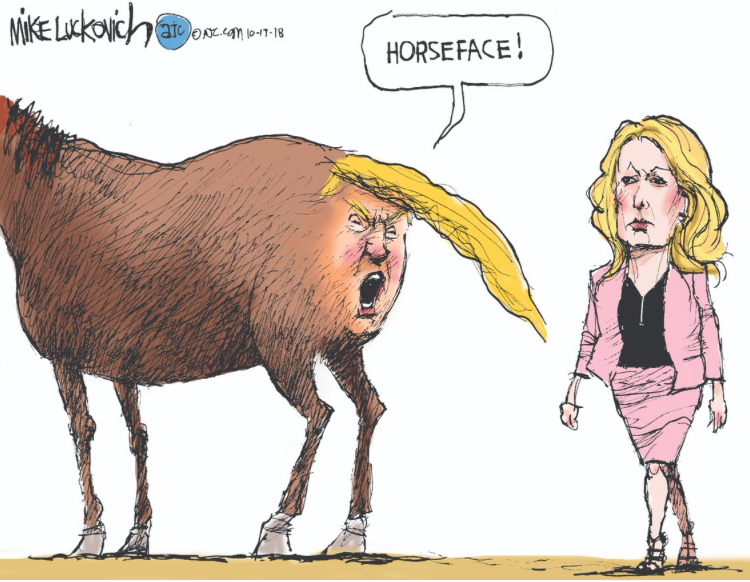 President Donald Trump slapped adult film actress Stormy Daniels with a demeaning new nickname on Tuesday, making her the latest of several prominent women whose personal appearance he’s insulted. Trump derided Daniels as “horseface” in a tweet gloating over a judge’s Monday dismissal of a defamation lawsuit Daniels, represented by her lawyer Michael Avenatti, had filed against the president.

The epithet, which caused an uproar on Twitter and cable news, also unsettled some of the president’s Republican allies, who are nervous about the president alienating women in the weeks before the November midterm elections. Trump has spent much of the past two days ridiculing Sen. Elizabeth Warren (D-Mass.) in terms that some critics call sexist. And less than two weeks ago, Trump publicly mocked Christine Blasey Ford, who accused his Supreme Court nominee, Brett Kavanaugh, of teenaged sexual assault.

In a Tuesday morning tweet citing a Fox News report on the dismissal of Daniels’s lawsuit, Trump said: “Great, now I can go after Horseface and her 3rd rate lawyer in the Great State of Texas."

“She knows nothing about me, a total con!" he added.

The timing of Trump’s attack confused some of his GOP allies. One former White House official, who said “plenty of descriptive terms” were used to describe Daniels inside the West Wing, found the president’s tweet troublesome with the midterm elections are three weeks away.

Daniels had sued the president after he wrote in an April tweet that her public claim to have been physically threatened against coming forward about her alleged affair with Trump several years ago was "a total con job." District Judge S. James Otero of the Central District of California dismissed the lawsuit on Monday.

Avenatti, who has appealed that decision, responded with a warning that he and Daniels would soon “demonstrate to the world what a complete shyster and liar you are.” The president is a “disgusting misogynist and an embarrassment to the United States,” the lawyer wrote on Twitter. “How many other women did you cheat on your wife with while you had a baby at home?" (Daniels, whose real name is Stephanie Clifford, claims she slept with Trump shortly after his wife Melania had given birth.)

Daniels also fired back herself, saying Trump’s comments “demonstrated his incompetence, hatred of women and lack of self control.”

She also appeared to debut her own nickname for the president, ending the tweet with: “Game on, Tiny.”