Nancy Pelosi: Portrait of a Badass who ate the president's lunch - and then walked away like a boss 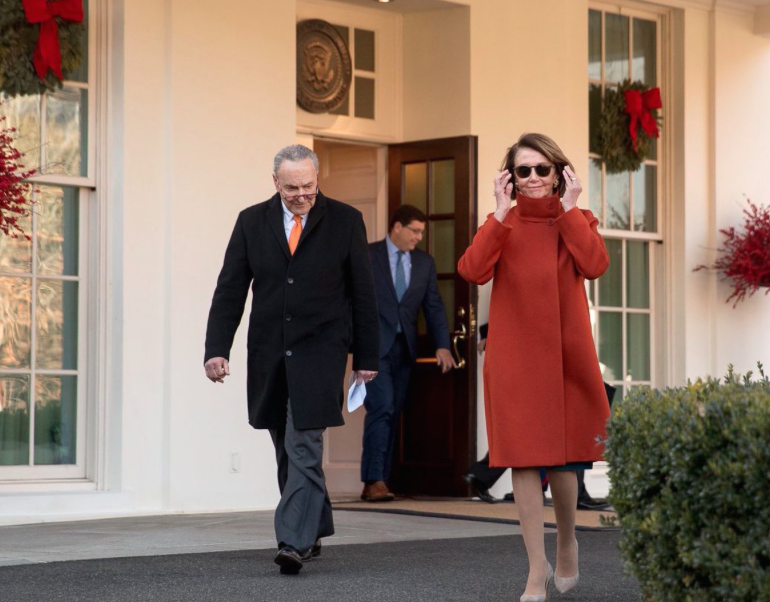 Mod: No wall for Donald? Going to shut down the government like a big baby? Somebody certainly did get his butt kicked by the incoming Speaker of the House.

Nancy Pelosi Just Mocked the President* to His Face in the Oval Office (Esquire link): On Tuesday, right about at lunchtime, Nancy Pelosi and Chuck Schumer dropped down the street to the White House to have a chat with the president*. What followed was a piece of video that will live forever as a window into this sludgepot of a political moment. It is not that remarkable if you've ever watched Question Time from any of the various parliaments around the world. (I mean, holy Oliver Cromwell, somebody presented the mace in the House of Commons on Monday.) But, because the American government is greased by tawdry piety and transparently artificial civility, the meeting might as well have taken place in the Octogon.

The single most lasting impression of this altogether remarkable bit of reality-show theater was the look we got into what happens when people tell this particular president* that he can't have what he wants.

Watch as Pelosi tries, not altogether angrily, to explain to him that he doesn't have the votes for the big, beautiful, stupid wall for which, of course, Mexico is going to pay. She says the votes aren't there. He keeps saying he can get them instantly, but that the problem is that he can't get the votes in the Senate. They're both right. He doesn't have the votes in either place. But he runs down all the applause lines that get the rubes all ginned up at his rallies, and Pelosi keeps calmly telling him that, while he's as full of shit as the Christmas goose, nevertheless he and his big, beautiful, stupid wall should get further stuffed anyway.

(You should also notice that, off to one side, Mike Pence clearly has been shot with the trank gun by the Secret Service.)

Even Schumer suddenly discovers a thin vein of iron in his spine and maneuvers El Caudillo del Mar-a-Lago into bragging about shutting down the government unless he gets his way, thereby undercutting any political strategy the Republicans in Congress might have been developing to blame a prospective shutdown on the Democrats. That sound you hear is the Republican congressional leadership taking delivery of a barge-load of bourbon.

Welcome to the next two years, and thank nature's god for them.

Pelosi has the president in her pocket and she knows it. (It will dawn on him eventually, too. Maybe.) The House controls the budget and, in January, the Democratic Party will hold the House. Since any argument about Pelosi's being an Accommodating Liberal Sellout should die with the release of this video, she will be the Speaker—and, as such, she can shred his administration*. This is the most essential part. 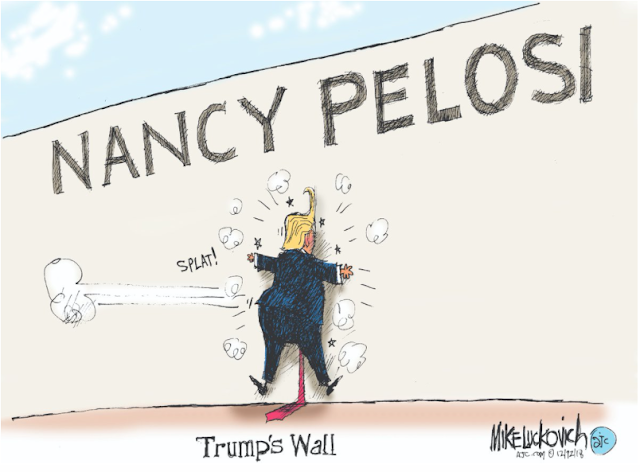 Reporter says Trump 'stormed out' of Oval Office after Dem meeting (The Hill link): Los Angeles Times White House reporter Eli Stokols said Tuesday that President Trump "stormed out" of the Oval Office after a meeting Tuesday with key Democrats and threw a folder full of papers out of frustration.

"He stormed out of the Oval, walked into an anteroom just off the Oval Office and had in his hand a folder of briefing papers. And he just scattered them out of frustration - threw them across the room," Stokols said on MSNBC's "Hardball," citing his own reporting with White House officials.

The public meeting quickly generated headlines after Trump pledged to shut down the government if he couldn't get funding for a wall along the southern border. He also said he would take the blame for that shutdown if it occurs.

"I am proud to shut down the government for border security, Chuck," Trump told Schumer. "I will take the mantle. I will be the one to shut it down. I'm not going to blame you for it." Stokols, the Los Angeles Times reporter, also said Tuesday on "Hardball" that Trump was frustrated with Schumer following the meeting.

"His old New York sparring buddy, he felt, got the better of him," Stokols said.

No evidence for Trump claim on 'terrorists': government sources (Reuters link):  President Donald Trump said on Tuesday that U.S. authorities had “caught 10 terrorists,” citing it as a reason for why the United States should build a wall on its Mexican border, but four government sources said there was no recent evidence of terrorism suspects being caught along the border.

A senior U.S. counterterrorism official, speaking on condition of anonymity because of the sensitivity of the issue, said: “We do not have evidence of known or suspected foreign terrorist organizations trying to infiltrate the southern U.S. border.”

Three national security officials agreed with that view, saying they knew of no recent border-related arrests. The three officials also asked not to be identified.

In a contentious White House meeting on Tuesday with House Democratic leader Nancy Pelosi and Senate Democratic leader Chuck Schumer, Trump demanded $5 billion in taxpayer funding for his wall, threatening a federal shutdown if he did not get the money.