Faking it? InfoWars' Alex Jones says he had a "form of psychosis" when spreading Sandy Hook conspiracies

Mod: Maybe pro-Trump fake news guru Alex Jones had a mental bone spur? Whatever the cause of his hideous idiocy, I hope the Sandy Hook parents take him for all he's got.

InfoWars' Alex Jones says he had a "form of psychosis" when spreading Sandy Hook conspiracies (CBS News link): InfoWars host Alex Jones, who is being sued by several parents of Sandy Hook victims, said in a deposition released Friday that he now believes the massacre was not a hoax. In the deposition posted on YouTube, Jones said he believes 26 people were killed in the 2012 shooting, but that "a form of psychosis" made him believe it was staged. 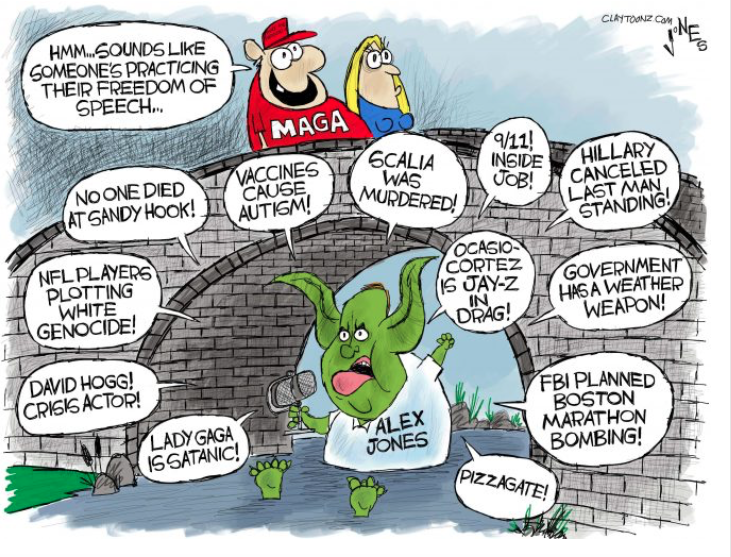 Jones is facing several lawsuits following he repeatedly claimed massacre in Newtown, Connecticut  — which left 20 children and six adults dead — was a hoax and the victims involved were lying. For years, he has suggested the shooting at Sandy Hook Elementary was staged with paid "actors." He has also claimed the children who died never actually existed.

Mark Bankston represents Sandy Hook parent Scarlett Lewis, whose son Jesse Lewis died at Sandy Hook and is seeking damages for false accusations and targeted harassment. According to his law firm's website, "The complaint charges that the defendants took part in an ongoing campaign to mock Ms. Lewis and other parents of children killed in the 2012 Sandy Hook school shooting, claiming the shooting was a 'false flag' conspiracy hoax and accusing them of a sinister conspiracy to lie about the circumstances of the tragedy."

During the three-hour deposition, Jones refused to apologize and attempted to minimize the damage he caused in perpetuating Sandy Hook conspiracies. He blamed his "psychosis" brought on by the stressful nature of his job, but he did not say he had been formerly diagnosed with the disorder.

"And I, myself, have almost had like a form of psychosis back in the past where I basically thought everything was staged, even though I'm now learning a lot of times things aren't staged," Jones said. "So I think as a pundit, someone giving an opinion, that, you know, my opinions have been wrong, but they were never wrong consciously to hurt people."

Jones also blamed the media for his actions and said that questioning public events is an "essential part of the First Amendment in America.

"Well, I'm just saying that the trauma of the media and the corporations lying so much, then everything begins -- you don't trust anything anymore, kind of like a child whose parents lie to them over and over again, well, pretty soon they don't know what reality is," he said. Jones told Bankson that he would no longer lie about Sandy Hook in the future, and that he would not share conspiracy theories without confirming them.

However, during an InfoWars broadcast Monday, Jones argued that Jeremy Richman, a Sandy Hook father who died by apparent suicide and had been a plaintiff in a defamation suit against Jones, had potentially been murdered to further build a case against Jones.