Grab Them By The Throat: The Internet Responds To Donald Trump's Attack On Adam Schiff's Neck

Mod: The article following spells out Donald Trump's rather retarded attack on Adam Schiff's physical appearance. Apparently the mad President is rather upset that Congressman Schiff believes there was collusion in 2016, and aims to hold investigations.

Trump campaign hawks ‘Pencil-neck Adam Schiff’ T-shirts (Vox link): President Donald Trump’s 2020 presidential campaign is now hawking T-shirts that mock the latest foil to the Republican Party: the notoriously soft-spoken House Intelligence Committee Chairman, Rep. Adam Schiff. The T-shirt, on sale for $28, features an illustration of Schiff with a pencil as a neck and wearing a clown’s nose. The image stems from a new nickname that Trump bestowed upon Schiff at a rally in Michigan earlier this week.

”Little pencil neck Adam Schiff,” Trump said on Thursday. “He’s got the smallest, thinnest neck I’ve ever seen. He is not a long ball hitter.”

Schiff came under fire from the President and his supporters earlier this week after the California Democrat maintained that “undoubtedly there is collusion” between the Trump campaign and Russia. Schiff’s assertions counter the conclusions from Special Counsel Robert Mueller’s investigation, which according to a four-page summary released by Attorney General William Barr on March 24, did not affirmatively find collusion. Now Trump’s defenders are out for blood.

Mod: Unfortunately for Trump the Internet is a two-way street, and many of his critics have responded in extremely uncomplimentary ways. Here is an example of what is now being widely referred to as the president's "Vachina." 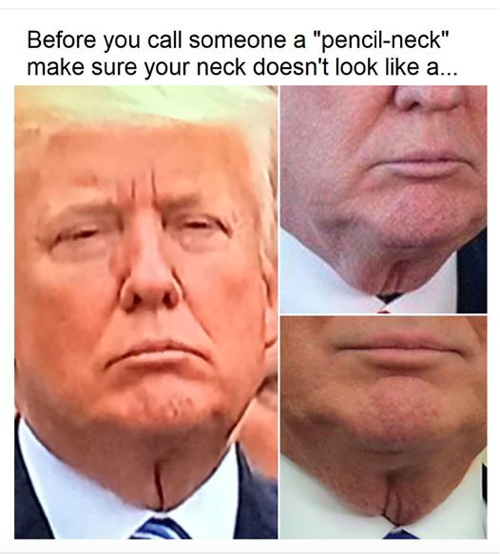 Mod: Adam Schiff addressed the House Intelligence Committee this week on Trump's evident collusion with Russia in 2016. There is a lot to see in the following video. But I especially enjoyed watching some unhappy GOP Congressmen squirm as their collaboration was spelled out for them in no uncertain terms. Obviously they want the Mueller Report to remain suppressed.


sierramadretattler.blogspot.com
Posted by The Moderator at 6:00 AM