141 Times: Why Is Trump Suddenly Playing Dumb About Julian Assange? “I know nothing about WikiLeaks”

Mod: For the next few months the world is going to be talking about all the military secrets Assange leaked, with the help of the Russians; while Trump twists himself into a pretzel trying to convince his fruit loops base that he never said anything about Assange or Wikileaks. Good luck with that, Donny!

Ignoring his record, Trump pretends to know 'nothing' about WikiLeaks (MSNBC.com link): WikiLeaks founder Julian Assange was taken into custody today in London, where he was wanted for skipping bail in 2012. He'll likely face criminal charges in the United States, and the Justice Department has already charged Assange with computer hacking crimes.

And while this will obviously be a major international story in the coming months, it's worth pausing to appreciate just how amazing Donald Trump's response to the developments was this afternoon.

President Donald Trump said Thursday that he knows "nothing about WikiLeaks" hours after the arrest of the organization's founder, Julian Assange, and two-and-a-half years after he frequently cited its information dumps about Hillary Clinton during the 2016 campaign.

"I know nothing about WikiLeaks," Trump told reporters at the White House, where he met with South Korean President Moon Jae-in. "It's not my thing." That the American president was able to say this with a straight face was unsettling -- because he does know WikiLeaks, and throughout his 2016 campaign, it was very much his thing.

In fact, Trump mentioned WikiLeaks more than 100 times in just the final month of the 2016 campaign, according to Factbase. Many of those times, he expressed admiration for its work. "This WikiLeaks stuff is unbelievable," he said once. "Boy, I love reading those WikiLeaks," he said another time. Yet another time: "Oh, we love WikiLeaks. Boy, they have really -- WikiLeaks! They have revealed a lot."

There's a reason Trump's denial today was literally unbelievable. This was, however, very much in line with the president's style. As regular readers know, whenever anyone in Trump’s orbit runs into trouble, the White House turns to the first page in its playbook: pretend the president doesn’t know the people or entities he obviously knows.

When Paul Manafort was indicted, for example, Trump’s former campaign chairman became some random staffer “who played a very limited role for a very limited amount of time.” When White House National Security Advisor Michael Flynn was forced to resign in disgrace, Team Trump decided he was “a former Obama administration official” who did some “volunteer” work for the president. Carter Page was described as someone Trump “does not know.” George Papadopoulos was dismissed as a “coffee boy.” Trump World even tried to downplay its association with Cambridge Analytica, the Trump campaign’s favorite data firm. 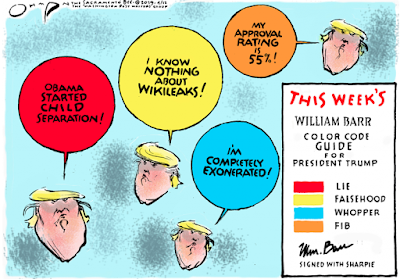 Roger Stone, naturally, became little more than "somebody who’s been a consultant" for dozens of Republicans.

It's a foolish and unpersuasive game, but it's clearly one of Trump's favorites. The Republican's opinions on nearly everything are guided by their utility to him personally.