$2 million to North Korea for the 'health care' of a murdered American? That Don Trump, he's a master deal maker.

Mod: The little details a master deal maker must take care of when he's on the way to winning a Nobel Peace Prize for a nuclear disarmament agreement with Kim Jong Un. After all, would you want to upset the Jongster when so much is at stake?

Warmbier was participating in a trip to North Korea late December 2015 through early January 2016 when he was detained and later charged for allegedly committing a "hostile act"—attempting to leave the country with a sign bearing a slogan from the ruling Korean Workers' Party. After sentencing, the 21-year-old at some point fell into a coma. He was eventually returned to the U.S. in June 2017 but died about a week later after he failed to regain consciousness, and the decision was made to have his feeding tube removed.

On Thursday, new information about discussions surrounding Warmbier's return was revealed by The Washington Post's Anna Fifield. Citing two unnamed sources familiar with the matter, Fifield reported that North Korea billed the U.S. $2 million for Warmbier's hospital bill and that Trump himself approved the invoice. 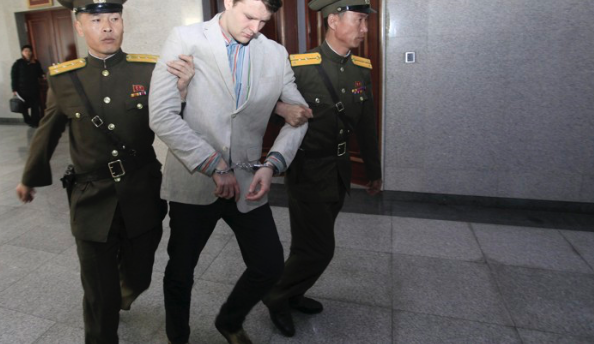 While the bill was sent to the Treasury Department, it could not be confirmed whether or not it was actually paid. White House spokesperson Sarah Sanders said, "We do not comment on hostage negotiations, which is why they have been so successful during this administration."

Mod: That little matter of Otto's likely murder being beneath Sarah's consideration.