The Hill: Why William Barr Should Resign 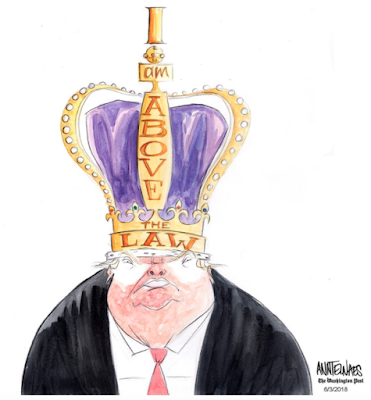 Mod: A little anticipation here. But Fudge Barr should resign no matter what he puts out today. His partisan enabling Trump's obstruction of justice has already done enough damage to this country.

Why William Barr should resign (The Hill link): After Attorney General William Barr releases his redacted version of the report from special counsel Robert Mueller on Thursday, he should resign. His blatant partisanship disqualifies him from continuing as the chief law enforcement officer of the United States. Neither Congress nor the public will trust that he has been objective and fair in what he has decided to make public of the report, nor will they believe that he can handle any further issues surrounding wrongdoing by President Trump with integrity.

Let us consider the record of Barr in his short time as attorney general in this administration. After two years of constant attacks by Trump on the Justice Department and special counsel for investigating the possible collusion between the campaign and Russian interference in the 2016 election, Barr could have been a breath of fresh air as an attorney general who would firmly stand up for the rule of law. Instead, he just joined in the attacks, calling for yet another investigation into FBI actions during the campaign and releasing a biased summary of the special counsel report.

However, according to Barr, Mueller refused to exonerate Trump on charges of obstructing justice. Barr overruled that determination after only a few short days of examining the two year investigation into the issue and concluded that Trump did not obstruct justice. Barr claimed that the refusal by Mueller to come to a conclusion on the criminal liability for obstruction “left it up to” Barr to reach a conclusion. But that cannot be true. The refusal by Mueller to exonerate Trump was not an invitation for Barr to annul the determination of the special counsel.

Instead, Barr took it upon himself to exonerate the president. He did so on the flimsy, if not incredible, ground that the president did not intend to obstruct the Russia investigation. Let us not forget that Barr argued that a president could not obstruct justice in an unsolicited memo that he sent to the White House and the Justice Department in what many have viewed as an undisguised attempt to win the nomination for attorney general.

By exonerating Trump, Barr brazenly violated the spirit and purpose of the special counsel regulations. The point of those rules, and the special prosecutor statute they replaced, was to take the political Justice Department out of prosecutorial decision making when a president was involved, precisely because presidents should not be investigating themselves. Yet Barr, appointed by Trump, injected himself along with politics smack into that decision, doing what would be expected of anyone beholden to the president. That was wrong and unforgivable.

With respect to the Mueller report, Barr has said that he wants to be as transparent as possible, but his actions, or rather the lack thereof, belie his words. One of the items that Barr intends to edit out of the Mueller report before making it public is grand jury material. Barr could have, and should have, tried to obtain a court order. This act was done during the Watergate investigation by the special prosecutor, permitting him to turn the grand jury material over to the House Judiciary Committee. But Barr has stubbornly, and without explanation, refused to seek any such order.

Similarly, the summary of the special counsel report released by Barr was seriously flawed, as many others have noted. While claiming that Mueller could not establish Trump campaign collusion with the Russians sufficient to prove guilt beyond a reasonable doubt, we do not know the level of evidence on this subject that Mueller did find. Just as important, we do not know how much the efforts of Trump to interfere with the special counsel investigation undercut the ability of Mueller to prove a case.

Furthermore, Barr announced that he was going to investigate “spying” on the Trump campaign by the FBI. Even though Barr admitted he had no evidence of any spying, he was eager to give credence to this claim that Trump and his allies use by finding fault with the counterintelligence investigation that Mueller eventually took over. Barr would not even wait for the independent and nonpartisan Justice Department inspector general to finish his investigation of some of the same FBI behavior.

Looking back at another day when the Justice Department was under assault, we can see how far our country has fallen under Trump and his new attorney general. During Watergate, two attorneys general, John Mitchell and Richard Kleindienst, were convicted of crimes arising out of their relationship with Richard Nixon. Those three dragged our federal system of justice and its reputation for professionalism into the mud.

In response, when Gerald Ford succeeded as president after Nixon resigned, he picked a nonpartisan and highly regarded lawyer, Edward Levi, to head the Justice Department. Levi, a Republican, won the respect of both Democrats and Republicans, and restored the national faith that the rule of law could be reestablished. Barr could have followed in the footsteps of Levi. It is a tragedy that he has so quickly chosen not to.

Elizabeth Holtzman served four terms in Congress as a representative from New York. She was on the House Judiciary Committee during Watergate.