Mod: The Mueller Report has generated a lot of negative press for Trump. And, of course, he has reacted in his usual off the hinges kind of way. I'm pretty sure it is time we started seeing this as comedy.

The Mueller report shows we don't have a cunning criminal in the Oval Office - we have a narcissistic imbecile (The Independent link): It’s worse than we thought; on balance, the Mueller Report appears to paint the US president as the perfect idiot, along with members of his team who did Putin’s bidding unbeknownst to them.

The special counsel ends his report with the following, somewhat chilling, conclusion: “While this report does not conclude that the president committed a crime, it also does not exonerate him.”

It goes on to say: “The evidence we obtained about the President’s actions and intent presents difficult issues that prevent us from conclusively determining that no criminal conduct occurred.”

The Mueller team concludes that they eventually decided not to reach any legal conclusions in large part because of the difficulties they faced in gathering evidence regarding the president’s actions and the intent behind those actions, as well as questions of fairness and complex US constitutional law issues.

Robert Mueller lays out the myriad difficulties that he and his team faced in gathering evidence for the investigation, including: lies to his investigators and to Congress, the admissibility of evidence, legally privileged information, the invocation of the Fifth Amendment in interrogations, etc. A seemingly impossible task for even the best team.

While the Mueller Report established that the Trump Campaign was aware of and, at times, knowingly accepted assistance from the Russian government in the 2016 presidential campaign election interference scheme, their actions did not necessarily rise a level that would meet the federal criminal definition of a “conspiracy”, or there was not enough evidence to sustain a conviction for federal campaign-finance offences.

Or, in the alternative, there just wasn’t the evidence to establish the conspiracy. This appears to be, by and large, because Trump and many of his team members were being played by the Russians and Wikileaks, unbeknownst to them. While Trump himself was being dog-walked by his staffers and family members.

I think the biggest takeaway from the report isn’t that Trump is some mastermind criminal, rather that an entire nation was duped by a team of Russian hackers that pried open our religious, racial and political fault lines and set us against one another like fighting chickens.

Russian hackers played on the ignorant, self-serving and lazy way we use social media, and the human being’s natural tendency to believe what one wants to believe and try to convince others of the same. We click “like” without reading, we share articles and infographics without investigating. We have been pawns in Vladimir Putin’s game of chess, and that goes from the average person in US town using social media to the president of the United States of America and his closest team members. 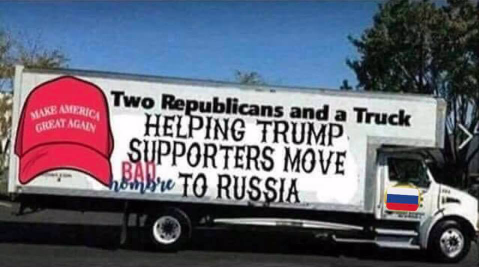 Let this report be a lesson to all Americans, and non-Americans alike – beware of what you read; beware of what you share. We are truly living in a dystopian society where words on a screen are taken at face value, unquestioned and repeated mechanically and systematically. Our incapacity to read critically is quite literally under attack.

So, I leave the question to my readers: is it not worse that the US president seems to have been merely a pawn in Putin’s chess game to influence US elections, along with much of the American public? Would it really have been more satisfying to find out that Trump Sr and /or members of his team actively conspired (as a legal term of art) to influence the US election results and interfere with the FBI’s investigation of alleged election interference?