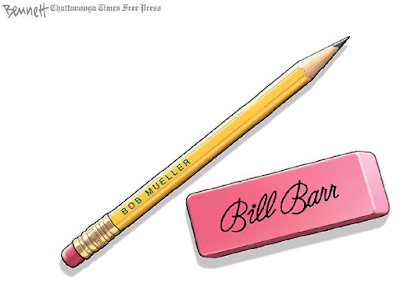 Mod: I think a fair interpretation of Judge Walton's words here is that a lot of people think Fudge Barr is attempting to cover Trump's big ass.

Judge: Barr sowing public mistrust with Mueller report handling (POLITICO link): Attorney General William Barr has created public distrust about whether the Justice Department is committed to sharing as much as possible about the Russia probe's findings, a federal judge said on Tuesday.

“The attorney general has created an environment that has caused a significant part of the public … to be concerned about whether or not there is full transparency,” U.S. District Court Judge Reggie Walton said during a hearing Tuesday afternoon on a Freedom of Information Act suit demanding access to a report detailing the findings of special counsel Robert Mueller.

Walton, an appointee of President George W. Bush, did not elaborate on what actions or statements by the attorney general have generated those perceptions.

Democrats and other critics have faulted Barr for adding his own conclusions favorable to President Donald Trump into a letter sent to Congress last month summarizing the top-line findings of the report. In addition, Barr has warned that he plans to make redactions to the report on grounds such as privacy and grand jury secrecy, prompting more complaints.

Mod: Trump gets off on the suffering of others. That now includes wishing death on those who oppose him.

Trump attempted to nickname the two Democratic Party frontrunners. “I believe it will be Crazy Bernie Sanders vs. Sleepy Joe Biden as the two finalists to run against maybe the best economy in the history of our country (and many other great things),” Trump tweeted.

“I look forward to facing whoever it may be,” he claimed, despite trailing both in the polls.

Ilhan Omar: Muslim lawmaker sees rise in death threats after Trump tweet (BBC News link): One of the first ever Muslim members of the US Congress has said that a tweet by President Donald Trump has led to an increase in threats against her life.

Minnesota's Ilhan Omar said the threats were sparked by "violent rhetoric," accusing Mr Trump of stoking right-wing extremism. "It has to stop," she added.

It comes after Speaker of the House Nancy Pelosi announced a new "security assessment to safeguard" the lawmaker. The tweet showed Ms Omar talking to a US-Muslim group about the 9/11 attacks.

On Monday Mr Trump stepped up his attacks against Ms Omar, calling her "out of control".