Mod: It isn't a bad endorsement. I mean, is there really another candidate running for president right now who isn't better than Donald "Traitor" Trump? Democrat or Republican?

For mayors, politics isn't a blood sport: Why we need Pete Buttigieg in the White House (USA Today link): Pete Buttigieg is a role model to mayors. We proudly endorse him from heartland towns, coastal cities and suburban communities across this country.

As we face unprecedented challenges, America needs leadership in Washington that gets things done. That’s why we need a great mayor in the White House.

We are more than 50 mayors across the country — from Santa Monica, California, to Topeka, Kansas, to Hartford, Connecticut — who know that an executive with vision and proven ability to get results is the key to a bright future for our nation. We see exactly that in Pete Buttigieg, mayor of South Bend, Indiana.

South Bend is a quintessential American city, with big challenges and ever bigger opportunities. It remains close-knit — people stop Pete on the street, give him ideas and feedback, and hold him accountable for everything from potholes to racial justice.

We have watched Mayor Pete over the past eight years, as his steady and inspired leadership has revitalized his city. It was no surprise to us when his constituents reelected him with 80% of the vote. Pete has transformed South Bend, and now he is showing what American leadership can and should be in the years ahead.

First, Mayor Pete puts practical solutions over partisan ideology. For mayors, politics isn’t a blood sport. While inaction and gridlock are the norm in Washington, mayors don’t have the option to kick the can down the road. Our residents expect electricity when they flip the switch, clean water from their taps and trash picked up regularly. It would be unthinkable for a mayor like Pete to shut down the government because of a petty ideological disagreement.

Mod: The rest of this endorsement is available at the link. Here is the list of Mayors who signed on. Sierra Madre's mayor can be found on line 12. 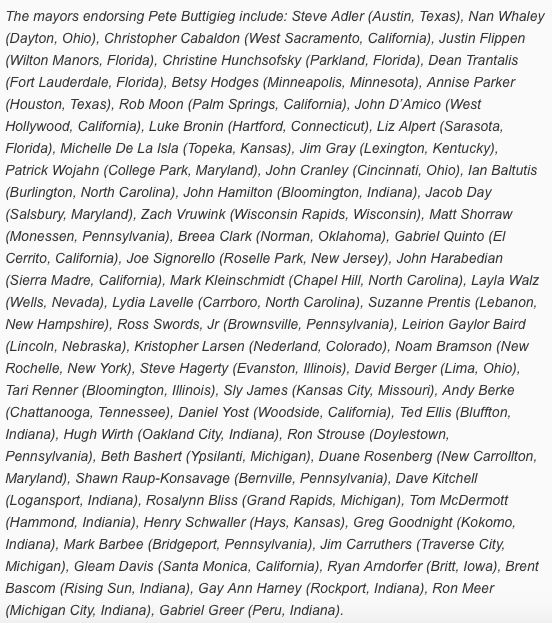 Mod: What are the Trumpers hiding now?

Whistleblower Complaint Involves ‘Promise’ Between Trump and Foreign Leader: Report (Daily Beast link): A whistleblower complaint that has caused a standoff between Congress and the U.S. intelligence community reportedly involves President Trump and a foreign leader, The Washington Post reports. The communications also reportedly involve a “promise” that an intelligence official found concerning enough to file a formal whistleblower complaint with intel’s inspector general. It’s reportedly not clear who the foreign leader involved in the interaction was.

Intelligence Community Inspector General Michael Atkinson determined the complaint to be credible and troubling enough to alert the congressional oversight committees. However, Acting Director of National Intelligence (DNI) Joseph Maguire did not transmit the complaint to Congress within seven days—as required by law—after reportedly seeking legal guidance from Justice Department officials. Atkinson notified the House and Senate intelligence committees about the complaint instead, without revealing its substance.

House Intelligence Committee Chairman Adam Schiff (D-CA) has since demanded the full complaint be disclosed, but Maguire reportedly argued the complaint was outside of his jurisdiction. Recent communications between the offices of the DNI and House Intel reportedly pointed to the White House without directly implicating Trump and disclosed the complaint “involves confidential and potentially privileged communications.” Atkinson is scheduled to appear before House Intel on Thursday in a closed session, and Maguire agreed to testify before the committee next week. The White House, the Office of the DNI, and a lawyer representing the whistleblower have not commented on the matter.