Traitor Trump: Not only was there collusion, he is still colluding 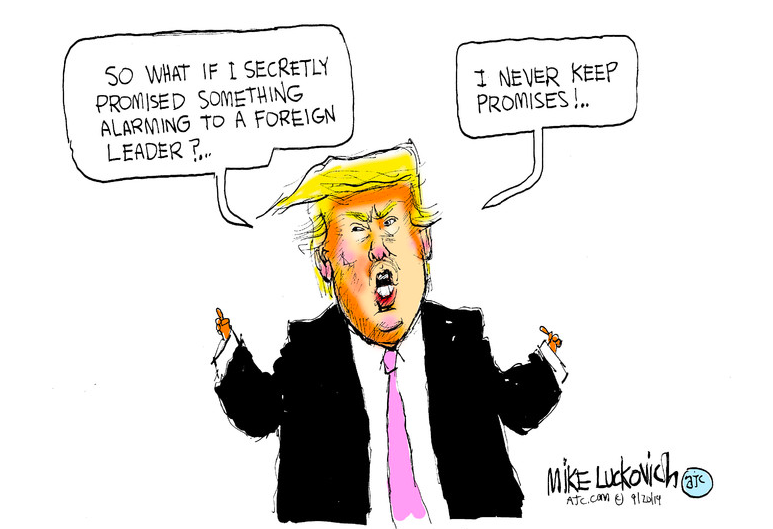 Mod: The worst president, and by far the biggest traitor this country has ever produced.

Larry Tribe, a Harvard Law School professor and frequent critic of Trump, noted the president's lawyers' arguments that he cannot be investigated for any offense until he's out of office, which "leads to one conclusion only: He must be removed from office. As soon as possible."

According to The Washington Post, the as yet undisclosed nature of the complaint involves Trump communicating a "promise" to Ukraine's President Volodomyr Zelensky. The information comes from two unnamed U.S. officials.

Around a fortnight prior to the complaint, filed to the inspector general of the intelligence community by a U.S. intelligence official who worked at the White House, Trump had called Zelensky. House Democrats are investigating the call.

Giuliani admitted in a CNN interview on Thursday that he had asked them to investigate former vice president Biden, the leading candidate for the 2020 Democratic nomination, over bribery allegations involving his businessman son, Hunter Biden.

The Trump administration recently withheld $250 million in military aid for Ukraine in its fight against Russian separatists, before eventually releasing the money.

"If this turns out to be what the whistleblower complaint is about & it's accurate, Trump must leave office immediately," tweeted Joyce White Vance, a former U.S. Attorney in Alabama. "A president can't offer US aid to a foreign country in exchange for prosecution of a political opponent. Heaven help us if we can't all agree."

Mod: Much more at the link.