Mod: He doesn't just blatantly interfere in US elections and invade his neighbors. Putin also murders his political opponents and journalists. What's not to love?

Though still negative overall, that -10 percentage point net approval rating represents a drastic increase from 2014, when Putin’s net favorable rating stood at -66 points among Republicans, according to YouGov Elections Editor Will Jordan.

Democrats’ attitudes toward Putin, on the other hand, have grown even more negative since 2014. His net favorable rating among Democrats sits at -62 points in the new YouGov/Economist poll, down from -54 points in 2014. 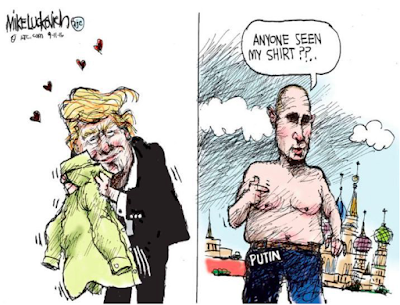 Much like President Donald Trump and Vice President Mike Pence, 9 in 10 Republicans describe Putin as a strong leader. Nonetheless, about 7 in 10 say they’re confident in Trump’s ability to “handle Russia.” By contrast, only 28 percent of Republicans say they have confidence in the CIA.

Despite this, 58 percent of Americans overall believe Russia is unfriendly or an enemy to the U.S. That number drops slightly to 52 percent among Republicans and 56 percent among declared Trump voters.