Roger Stone: The Guy the President of the United States and his Attorney General are fighting to keep out of jail

Mod: It's not just that so many of Trump's buddies are sleazy creeps, it's also that he is also endlessly devoted to them. To the point of tearing down the Justice Department. What's the reason for such idiotic and destructive loyalty? According to this link they've been hanging for 30 years.

'Seeking similar couples or exceptional muscular well-hung single men.' Inside Roger Stone's swinging marriage where he posted ads online and frequented notorious sex clubs with his 'insatiable' wife (The Daily Mail link):  Just off Pennsylvania Avenue, a block from the White House then occupied by Bill and Hillary Clinton, was one of America's raunchiest sex clubs for couples only – dedicated to wife-swapping and uninhibited sex with strangers.

The Stones were card-carrying regulars at Capitol Couples and also at one of the raunchiest sex clubs for couples in New York City, Le Trapeze. In 1996, when word leaked out that longtime political consultant Stone, working for the conservative cause of Bob Dole, was actively involved in the swinger lifestyle with his wife, investigative reporters began looking into their involvement. 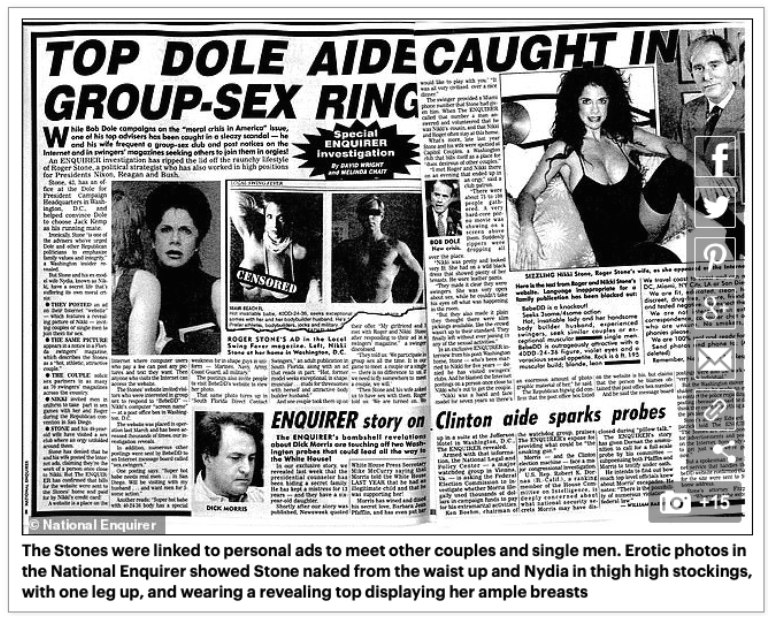 One man claimed that Stone had struck up a conversation with him at a Republican fundraiser on Capitol Hill in the winter of 1994 and asked 'whether my wife and I like to have a good time.' Stone then handed him a photo of Nydia and said, 'Keep it. It has our phone number on the back. If you want to have a good time with us, call us.'

While the Stones weren't doing anything illegal or criminal as swing club regulars, his activities were viewed as hypocritical and immoral based on the conservative family values that Dole espoused in his campaign, and that Roger Stone advocated as a Dole front man. Not only were the Stones identified as swing club aficionados, they were also linked to personal advertisements to meet other couples and single men in what was reported as some 70 swinger magazines and at least one website.