Disaster Don: US economy posts its worst drop on record

Business ground to a halt during the pandemic lockdown in the spring of this year, and America plunged into its first recession in 11 years, putting an end to the longest economic expansion in US history and wiping out five years of economic gains in just a few months. A recession is commonly defined as two consecutive quarters of declining gross domestic product — the broadest measure of the economy. Between January and March, GDP declined by an annualized rate of 5%. 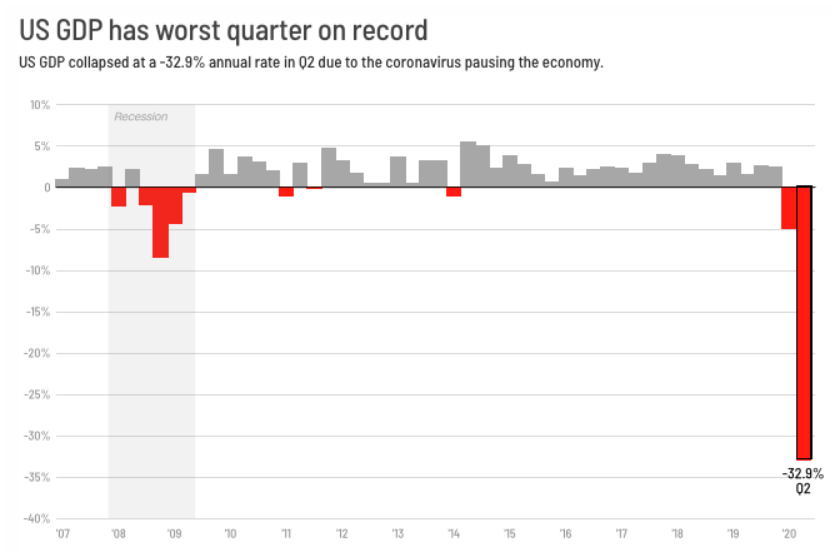 But this is no ordinary recession. The combination of public health and economic crises is unprecedented, and numbers cannot fully convey the hardships millions of Americans are facing.

In April, more than 20 million American jobs vanished as businesses closed and most of the country was under stay-at-home orders. It was the biggest drop in jobs since record-keeping began more than 80 years ago. Claims for unemployment benefits skyrocketed and have still not recovered to pre-pandemic levels.

‘America’s Dying’: Russian Media Is Giddy at Chaos in the USA (The Daily Beast link): From the U.S. troop drawdown in Germany to Trump’s refusal to slam Russia over soldier bounties, Russian state media is jubilant over America acting in the Kremlin’s interests.

sierramadretattler.blogspot.com
Posted by The Moderator at 10:00 AM