Mod: Even the ghost of Saint Ronnie has had enough of Mad King Donald.

Reagan Foundation demands Trump and RNC stop raising money off his image (Raw Story link): The current Republican president is facing a legal fight from of his deceased predecessors, according to a new report in The Washington Post. “The Ronald Reagan Presidential Foundation and Institute, which runs the 40th president’s library near Los Angeles, has demanded that President Trump and the Republican National Committee (RNC) quit raising campaign money by using Ronald Reagan’s name and likeness,” columnist Karen Tumulty reported Saturday. 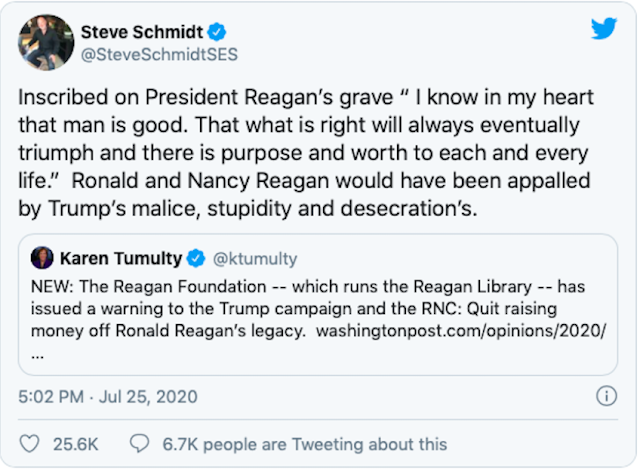 Tumulty explained that, “What came to the foundation’s attention — and compelled officials there to complain — was a fundraising email that went out July 19 with ‘Donald J. Trump’ identified as the sender and a subject line that read: “Ronald Reagan and Yours Truly.”

“The solicitation offered, for a donation of $45 or more, a ‘limited edition’ commemorative set featuring two gold-colored coins, one each with an image of Reagan and Trump. The coins were mounted with a 1987 photograph of Reagan and Trump shaking hands in a White House receiving line — the type of fleeting contact that presidents have with thousands of people a year,” the newspaper explained.