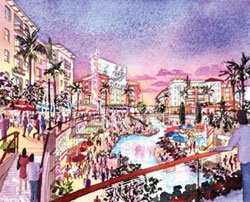 An article up on the Sacramento Bee "Capitol Alert" site this morning entitled "5,300 delayed projects listed," reveals the following:
The state Department of Finance has released a 161-page, 5,300 item list of public works projects that will be suspended or delayed indefinitely because of the state's cash crunch ... The list was published as the Pooled Money Investment Board, an obscure agency that controls disbursements from the state treasury, began a meeting to determine whether last month's suspension would be modified for individual projects.
You can access the list of suspended projects by clicking here. Scroll down to page 154 for the EMTV listing.
Among the items listed for suspension or indefinite delay due to the state cash crunch are several projects of interest to Sierra Madre. Our city faces a loss of $56,227 on an unidentified project. The San Gabriel Valley Council of Governments (the local SCAG cabal, which lists Joe Mosca as a member) takes a $75,829 hit. But speaking of SCAG, the big loser here? Bart Doyle and his Titan Corporation's famed redevelopment project, El Monte Transit Village. The amount of the state check that won't be arriving anytime soon? A cool $26,543,000. It is one of the larger sums identified on the report.
Of course, you might be wondering why Titan would have been the beneficiary of so much of our hard earned tax money. But that's redevelopment for you ..
Posted by The Moderator at 11:56 AM