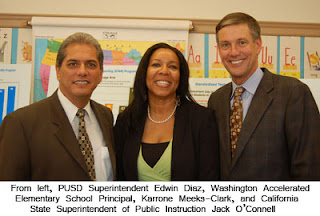 What you'll find here are several brief snapshots excised from three notable articles covering this story. Links are provided if you somehow feel the need to read all of this stuff. But what's involved are Measure Y funds that somehow just, well, disappeared. Money that was supposed to help repair schools, but apparently didn't quite make it to class. We the voting public passed Measure Y a few years ago, and due to our generosity $240 million dollars was turned over to our very own Pasadena Unified School District. What happened to it after that nobody seems to completely know.
Snapshot #1: PUSD Leaders Urge Prosecution of Measure Y Fraud. Apparently the L.A. County District Attorney wasn't quite sure he wanted to prosecute the malefactors. This from a press release put out by the PUSD last December:
"We urge the District Attorney to re-open its investigation of Measure Y fraud on the Washington Middle School project," said Superintendent Edwin Diaz, who joined PUSD in March 2007. "Our forensic investigator uncovered a trail of improper and illegal activity and we strongly believe that the perpetrators should be criminally prosecuted. Tomorrow, I will urge the Board of Education to begin civil proceedings against those who we believe misappropriated scarce education dollars from our schools."
Snapshot #2: Seems pretty clear, right? Somebody stole money from the PUSD, and their forensic gumshoe proved it. So why wouldn't the D.A. touch this case, one that involved shady contractors stealing taxpayer money? In the article "One more look," published in December, the Pasadena Weekly had this to say:
However, when (Pasadena) detectives submitted their evidence, prosecutors declined to file criminal charges because the school district's Measure Y record keeping was not adequate to secure a conviction.
Now that is unfortunate. Somebody made off with over $200,000 in PUSD funds, and they don't even have the paperwork to prove it. In the real world something like that might actually get you in trouble with the boss. Even if you had a rough childhood. The Pasadena Weekly continues with more disheartening information:
In the newly released documents, forensic auditor Michael Ammermon ... states that between November 2006 and July 2007 the district paid $216,904 to Jessie Yzaguirre, 52, of La Crescenta, an unlicensed contractor. According to Ammermon, Yzaguirre used Advent Construction Co.'s name and business license number, along with a contact within the district, in order to receive money for work on renovation projects at Washington Middle School.
So the PUSD gave almost $217,000 in our cash to an unlicensed contractor using somebody else's ticket, and now they're surprised and outraged to discover that they were ripped off? Is it just me, or does the word 'chump' come to mind?
The final snapshot. In an article printed last week ("Documents allegedly show misuse of Measure Y funds"), the Pasadena Star News revealed an interesting dynamic involved in the disappearance of these funds:
When the discrepancies were discovered, district officials met several times with (Mark) Kingsbury, the assistant construction coordinator for Measure Y projects, who approved the invoices in question ... A month later Ammermon conducted a taped interview with Yzaguirre, who said he paid Kingsbury between $500 and $3,500 in $100 bills for every project he billed for, according to records ... "It is the only way I can get work or he won't hire me," Yzaguirre said in the interview ... Yzaguirre estimated he gave Kingsbury between $40,000 and $60,000 - "maybe more" - of the $216,000 he received from the PUSD, according to the documents.
And just when you'd thought you'd heard enough, the Star News had to go and add this:
The day after his alleged confession, Yzaguirre recanted in a garbled letter faxed to the district. He said his drug addiction caused him to fabricate the story about paying off Kingsbury.
Well, there you go. The PUSD, through its Measure Y construction coordinator, funneled nearly $217,000 in school repair funds to a guy whose addictions are so bad he doesn't seem to be able to tell whether he is telling the truth or lying. Sure hope the kids weren't around when he was hanging out at school.
You know, it's a good thing we just passed Measure TT, the "Pasadena, Altadena and Sierra Madre School Improvement Bond," valued at $350 million. I mean, they're going to need at least some of it to replace the cash they lost from the previous school improvement bond. Right?
Posted by The Moderator at 5:00 AM