Take the Last Train to SCAGsville 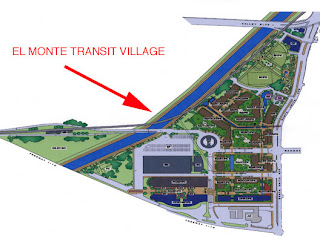 Having written recently about how the Sacramento financial debacle has cost SCAG's "El Monte Transit Village" a cool $26.5 million big ones (check this link for Sierra Madre's connection to all of this), I figured it was time to get over there and see what all the excitement is about. As far as I'm concerned too many so-called bloggers write only about what they read on the internet, and really should get out more often. And besides, after reading the hype provided on The City Project website, who wouldn't want to go? Check this out:
"City Council Approves El Monte Transit Village - The City Council on Sept 4, 2007, approved the El Monte Transit Village, a comprehensive 65 acre mixed-use transit oriented development that will help revitalize the remarkably diverse community of El Monte, CA, with up to 1,850 residential units including affordable housing, about 491,000 square feet of retail and office space, better parks to improve physical and psychic health with links to the Emerald Necklace along the Rio Hondo and San Gabriel River, thousands of jobs for local workers, enhanced bus and rail service near the most successful bus lane in the country and the busiest bus station west of Chicago, green construction, and regional educational facilities. The project includes important lessons for transit oriented development throughout the nation and California, and for revitalizing the Los Angeles and San Gabriel Rivers."
All the appropriate buzzwords are there, right? SCAG's "Compass Blueprint" also offers some insight. And the CoStar Group's site has some pretty exciting information to share with us as well. In their Sept 17, 2007 piece entitled "Titan Group Bringing $1.2 Billion Transit Village to El Monte," author Sasha Pardy waxes equally rhapsodic:
"The El Monte, CA City Council approved a $1.2 billion, transit-oriented, mixed-use development to be developed around Metro El Monte's bus hub. Dubbed El Monte Transit Village, the project sits atop 60 acres on the I-10 Freeway at Santa Anita Blvd., a main corridor of the San Gabriel Valley. To be developed by the Titan Group, Transit Village is planned to include 560,000 square feet of retail, 1,850 residences, 500,000 square feet of office space, a 200-room hotel, and 11 acres of green space. Central to the design is a system of pedestrian walkways and trails with direct access to the Metro Bus Hub and Metrolink station."
Some pretty substantial claims being made here, and I could not wait to check it all out. But when I got there I realized the build-up must have inflated my expectations a bit, because all I felt was some major disappointment. And it's not that they haven't really gotten this thing underway yet, it's just that what is in place already is, well, not quite as splendid as the $1.2 billion price tag would indicate. Especially when you consider that at least a portion of this huge dollar figure is coming out of our taxes.
Let's start with the bus station. It turned out that "the busiest bus station west of Chicago" is a rather dilapidated cement structure that wasn't busy at all. As a matter of fact, it was pretty sparsely populated. Below are a couple of photos that I think illustrate my point. 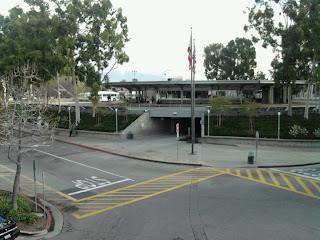 And the "better parks to improve physical and psychic health with links to the Emerald Necklace along the Rio Hondo and San Gabriel River" bit turned out to be a cement bottomed algae bloomed trickle serving mostly as a target for drained liquor bottles hurled from the trailer camps on the other side. The rest of the site was comprised of a down-at-the-heels Chevy dealer, bus parking lots, some one-story industrial buildings, a dentist's office, a fire station with a training facility out back, and a couple of ballfields. All of which will have to be leveled to make room for SCAGsville. 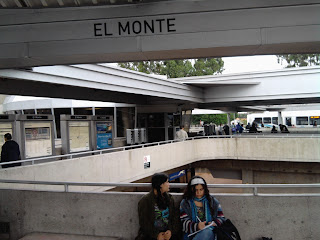 Here's some numbers that don't quite add up. 1,805 residential units, 1,560,000 combined square feet of stores and offices, plus 11 acres of grass, all in an area comprising a mere 60acres, or 2,613,600 square feet? These buildings are going to have to be rather tall to shake hands with those kinds of numbers. And if you've ever lived in an area with a lot of tall buildings packed into a small area, you know that we're talking about a neighborhood where the sun won't shine.

But look, let's step beyond the obvious charade here. SCAG has a serious problem. On the one hand they are under orders from Sacramento and their other funding sources to come up with some real solutions to the immense traffic problems on our freeways. There are just too many cars and too little driving space for a county of 7 million people. But SCAG is also compelled by their patrons in the BIA and other pressure groups to help them wedge high-density redevelopment into communities that don't want it. And these are, of course, highly conflicting agendas. How can you possibly saddle traditional suburban residential communities with high density redevelopment and not create even more auto traffic? It's just not possible. So SCAG, along with the crafty redevelopers at Titan, cooked up the "Transit Village" concept. The idea being to construct large high-density settlements in urban neighborhoods with a mass transit facility at its core. The assumption here is that people buying condos in these "transit villages" will somehow feel compelled to hike a few blocks to a bus depot rather than just get into their cars like they would anywhere else. And with the El Monte Transit Village being right next to the 10 Freeway, why would somebody want to waste valuable time walking to a METRO station? Obviously just because you situate people near mass transit is no guarantee they'll ever care to use it.
As always, the real agenda here is the amount of money to be made building boondoggles like the one El Monte got suckered into approving. With the rest of this being world salvation happy talk designed to con the congenitally gullible and cozen massive funding out of Sacramento and Washington. And to think these are pretty much the same people that wanted to redevelop downtown Sierra Madre ...
Posted by The Moderator at 5:00 AM