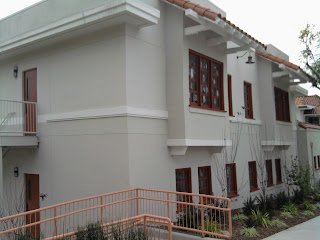 This is how it is supposed to work. The Planning Commission reviews applications for building projects, and then either approves, recommends changes, or rejects them outright. And on rare occasions a change to the General Plan is required as well. This occurs when a proposed building is not in line with the zoning regulations of an area in question. And General Plan changes are not lightly given. Think of it as trying to get a new Amendment added to the United States Constitution. It's just about that hard. And the only people who can authorize a change to the General Plan in Sierra Madre (and almost everywhere else) are those brave individuals that we elect to serve on our City Council.
Why is this the case? Without zoning regulations bad things might happen, stuff that really isn't in the best interests of the people living here. Like, let's say, a insecticide factory being built beside a nursery school. Or a sewage processing plant constructed next to a restaurant dedicated to fine dining. You get the picture. And zoning regulations help maintain a community's value as well. A well-ordered and maintained community being a much more enjoyable and safe place to live.
But apparently our friends at the Congregational Church somehow missed out on this very basic lesson in polite civic behavior. Or, if they actually knew about this stuff, did they deliberately ignore the zoning laws of Sierra Madre in order to illegally construct a building? One that might not be where it currently stands this time next year?
In case you have yet to behold the structure in question, it is located just north of Sierra Madre Boulevard and to the east side of Hermosa. It is a two level expansion of this Church's storied edifice located just around that corner.
Among several other things, the Congregational Church requested an amendment to this city's General Plan at Tuesday night's City Council meeting. This amendment was one of the conditions the Planning Commission had decreed as being part of the approval process for the Church's New Life Center building project. Of course, ordinarily when someone wants to build a building here in town, they get their city approvals done first. But apparently what the folks at the Congregational Church did was build the building and then ask for the City Council's approval. A most irregular way of doing business. Kind of like driving a brand new car without first going through the unpleasant process of paying for it. Or even getting a driver's license.
As was pointed out by a visibly annoyed Mayor Zimmerman, the Planning Commission required the Church to obtain this General Plan amendment before it began the actual construction of the project. That requirement was more than reasonable given that the Church was requesting permission to build an "institutional" project on parcels of land zoned commercial. The Planning Commission's condition of approval stated that the Church must first "obtain the City's approval of a General Plan Amendment to designate the subject properties as Institutional."
However, and as we learned Tuesday night, the Church just went ahead and built their project without getting the necessary amendment done first. Just up and did it. According to the Church's business manager, who was present and spoke at this meeting, the City told the Church it could build the project without obtaining the amendment if it simply applied for the amendment. Who in the City told the Church this patently absurd information? The Church's business manager seemed unable to say. Nor did the Church's business manager care to comment on why the Church would go to all the trouble and expense of constructing such an edifice based on what was obviously erroneous information. Didn't they realize they were taking just a wee bit of a chance here? And that maybe they'd want to check around a little first? Call a phone friend? Especially when the Planning Commission specifically told them that getting the nod from the City Council on that amendment thing was a key condition for their approval? I mean, Sierra Madre does have a couple of bulldozers, you know.
Something else that was rather odd about all of this. The Planning Commission heard the Church's request for the amendment in January of this year. And the resolution the Planning Commission adopted approving the amendment change, which was forwarded to the City Council for its necessary approval last Tuesday, leaves out that rather significant detail about the Church already having built the building. You can only wonder who it is that they thought they were fooling. Maybe they were all experiencing a shared senior moment?
A couple of questions for you. Is this "New Life Center" constructed in that part of Sierra Madre covered by Measure V? Seems that it is to me. And if so, does anybody know if it is in compliance with 2-30-13? We're going to need to get out the measuring tape and see what's up with that one. Should we bring Sandy Levin along, just in case? And some crowbars and saws to help with any compliance issues?
Update (7:50AM): I just got a call from Mayor Zimmerman, and he is demanding that the head of the Planning Commission address the City Council at the next meeting. Additionally he has requested that Development Services get over to Hermosa and measure this building for possible 2-30-13 violations.
Posted by The Moderator at 5:00 AM