Could A Blog Have Stopped Bernie Madoff?

What we're looking at here is an article from a Wall Street blog entitled Exchanges - Blogging About NYSE Euronext Markets. And the discussion is about Bernard Madoff, the man charged with perpetrating what could turn out to be the largest investor fraud ever committed by a lone individual. And just how big a fraud are we talking about here? According to USLaw.com, Madoff, a former head of the NASDAQ Stock Exchange and the owner of the highly regarded (at least until recently) Madoff Securities LLC, is now suspected of defrauding approximately 10,000 individuals out of well over $50 Billion dollars. Quite an achievement.
If you're prone to weltschmerz (and when it comes to celebrity controversy such as this, who isn't?) you can go to USLaw.com's Madoff Client Database and map out the victims of this fraud through the use of advanced satellite technology. You'll be interested to discover that Bernie's victims are from all the very best neighborhoods.
Victim's of the Madoff Scandal include such celebrity figures as Steven Spielberg, Uma Thurman, Henry Kissinger, Larry King, U.S. Senator Frank Lautenberg, and, even though he's been dead for awhile, John Denver.
But what we're really talking about today is the sad case of one Harry Markopolos. You see, Harry knew all about what Madoff was up to, and he had just the evidence to prove it. And what did he do with this information? All the right things. And, of course, because he did, very few people got to hear his warnings, and even less did something about it. Here's where we're going to let the Exchanges Blog take over.
Perhaps the biggest irony of the Bernard Madoff case is that Harry Markopolos, the investor-turned-investigator who for years warned other investors and the Securities and Exchange Commission that Mr. Madoff was running a Ponzi scheme, today is haunted by regrets that he was not more effective in getting others to heed his whistle blowing, according to The Wall Street Journal. 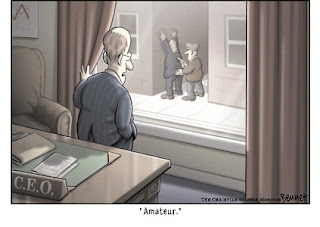 Mr. Markopolos shouldn't fault himself; rather, he deserves immense credit and appreciation. He did more than anyone else to sound the alarm. According to the article, he did manage to warn off some prospective Madoff investors. The SEC inspector general is investigating how the agency missed the alleged fraud, but surely Mr. Markopolos bears no blame. He sent the SEC and investors a detailed 19-page analysis, listing 25 red flags about Mr. Madoff's supposed investment results.
Certainly any failure to convince others was not due to a lack of effort. Perhaps Mr. Markopolos lacked only an effective medium to communicate his warning. Here's a thought experiment: What would have happened if Mr. Markopolos had blogged his analysis? That is, what if he had posted the entire piece on a blog, under his name or a pseudonym?
Interesting. Here is a guy who had information that, if properly disseminated, would have saved thousands of people from the indignity of having been robbed of all their savings. And, being a decent fellow who was seriously attempting to do what he thought was the right thing, went to the Securities and Exchange Commission with the goods. And what happened? The Feds then in turn promptly either ignored or even lost Harry's evidence. So what this article is suggesting is that had Harry simply turned on his computer, set up let's say a Blogger account (which is the on-line host of the highly regarded Sierra Madre Tattler), and started a blog called something like Bernie Madoff Is A Dirty Rotten Lying Thief, he could very well have had a far more profound and effective influence in this world.
Something to think about.
(Note: thanks to the always excellent Pasadena Sub Rosa for pointing out the Exchanges article.)
Posted by The Moderator at 5:00 AM