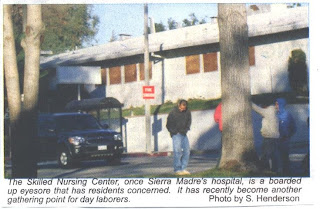 On the front page of the most recent edition of the Mountain Views "Observer" there is a photograph of day laborers supposedly standing in front of the Skilled Nursing Facility on Sierra Madre Boulevard. The text below the photo reads as follows: "The Skilled Nursing Center (sic), once Sierra Madre's hospital (sic), is a boarded up eyesore that has residents concerned. It has recently become another gathering point for day laborers."

Now we could have a discussion about the kinds of ethnic animosity shown by lumping largely Hispanic "day laborers" in with terms like "boarded up eyesore," "recently become another gathering point," and "residents concerned," but I'd like to save that for another time. There will a better opportunity when we publish our interview with Ana Ramirez.
But what I'd like to point out today is the deceptive way in which this photograph is being used. It would first appear that the day laborers in question are indeed, as the publisher of the "Observer" takes such pains to point out, standing in front of the Skilled Nursing Facility. And I suppose that if you are an uninformed boob knowing nothing about the issues involved here you could probably be convinced that this is a new and threatening event. Which is the apparent intention of the person who published this picture and accompanying text.
On closer examination, however, it becomes obvious that what we are being told we're seeing and what this photo actually portrays are two very different things. Note the car that is about to pass between the workers and the Skilled Nursing Facility. If they were really standing in front of this building, wouldn't that car have to be driving on the sidewalk?

This is a photo taken from Memorial Park, and we're looking out across Sierra Madre Boulevard. And rather than a picture of a building that "has recently become another gathering point for day laborers," this is actually the same place day laborers have been waiting for work for years, which is at the front of the park and across the street from the SNF.

You can only wonder what political advantage the supporters and backers of the Mountain Views "Observer" believe they will gain by these kinds of tactics.
One more thing about day laborers. The reason they are here is because people in Sierra Madre hire and pay them to work. There aren't many other reasons for them to travel to this town. They work hard, they do it with dignity, and they don't whine about it. I wonder how many of the people using them to make the cheap and deceptive political point the article that accompanied this photo attempted to make could survive if this was how they had to make their living. And you also have to ask why a person holding a senior position in the Pasadena Foothill Democrats would be playing this kind of card.
(Credit: I'd like to thank site commenter Pasta for pointing out the discrepancies in the "Observer" photo and text.)
Posted by The Moderator at 3:11 AM