The Most Clueless Headline Ever? 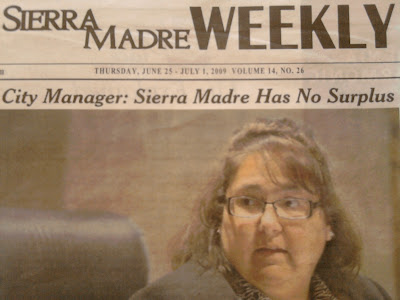 We just don't seem to have much luck with our weekly news journalists in this town. One because their associations always seem to be with the usual small town real estate hustlers that we all hold in such high regard. But also because they're kind of lazy and just never seem to put in the effort necessary to understand what is really going on.
And every once in a while they lay an egg of such magnitude that the effects rumble through town like an aftershock, causing The Tattler news room phone lines to light up for hours. Which is a good thing. Besides, who else are people going to call? Susan Henderson?
So one of the calls I got Thursday was from our hard working City Manager Elaine Aguilar. And usually when I get a call from Elaine it can only mean that word has gotten to her that somebody has misquoted City budget numbers again, and that she needs to put that wandering genii back in its bottle. Which, given the high quality of news reporting in this town, has become something of a full time job for her. And I am always available to assist in damage control.
As an aside, it has been my contention for awhile that Elaine needs to start using press releases as a way of getting information out to our esteemed local news weeklies. With the data spelled out in ways that are clear, unmistakable, and simple. Maybe she could include a set of wood blocks with each of these press releases? It couldn't hurt.
So anyway, I asked Elaine about her appearance on the front page of The Sierra Made Weekly beneath the headline, "City Manager: Sierra Madre Has No Surplus." She replied in a way that confirmed my belief that she wasn't very pleased. And why should she be? It is obviously something that is as far from the truth as you can possibly get without going to Monrovia. And since this Weekly article covered the very City Council meeting where surpluses were actually discussed, well, you get the idea. Too much sunshine, as they say.
So here's the real picture. In the Fiscal Year 09-10, the City of Sierra Madre will have a surplus of $86,000. And in Fiscal Year 10-11 that surplus will grow to a very handsome $541,000. This comes from a document called the General Fund Summary, and can be obtained from City Hall for the cost of a phone call.
Now we here at The Tattler did reprint that fateful day some passages from a Pasadena Star News article entitled, "Sierra Madre in better financial shape than its neighbors." And this article spoke of surpluses of $800,000 and $1.1 million, far larger than what City Hall is putting out. And while it is unfortunate that those numbers are not accurate, at least the PSN is aware that we do have surpluses.
There is one other unfortunate and mistaken notion in this Sierra Madre Weekly article that requires some maintenance from their friends at The Tattler. Here is the paragraph in doubt:
"In response to the controversy, City officials are making the rounds telling citizens that they should be grateful for the UUT, even if it seems like an unnecessary burden at the moment. It's saving the City's budget and ll those popular services - like the Police and Fire departments - that it funds."
The patronizing air of the quoted passage aside, this really is a remarkably poorly informed statement. Not just from the misrepresentation that our City employees are out campaigning to keep the Utility User Tax hike, which they most decidedly are not. But to suggest that people working for the City of Sierra Madre have taken it upon themselves to promote tax policy is just, well, civics challenged.
Here in Sierra Madre, as in most other places where democratic rule is the accepted form of governance, policy matters are something handled by elected officials. Our City employees do not go out and campaign for things, especially those as politically charged as the UUT.
I mean, who do these people think we are? Sacramento?
Posted by The Moderator at 7:00 AM