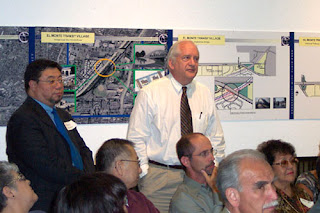 We ran a couple of articles a while back about the El Monte Transit Village. The company that cooked up this little (at least partially) tax payer funded redevelopment project is called The Titan Group. The COO there, according to this SCAG site on the matter (see page 8), is none other than our man Bart Doyle. Obviously he must be having a very interesting couple days at work. Looks like his boss has strayed from the paths of business propriety.

"An El Monte developer behind the city's $1.2 billion redevelopment project has been arrested and is expected to be charged this week with fraud and embezzlement, police said today ... John Leung, president and chief executive of El Monte-based Titan Group, was arrested late Friday afternoon, said Capt. Marcy Vail of the El Monte Police Department. He is being held in lieu of $1 million in bail ... Leung, 53, is expected to be arraigned Tuesday on five felony counts of forgery, fraud, embezzlement, grand theft and burglary and an additional count of dissuading a witness than can be filed either as a felony or misdemeanor, Vail said."

"Leung's company is behind the proposed El Monte Transit Village, a 65 acre mixed-use development, including retail space, residential units and office space, to be built around the El Monte Bus Transit Station. The company did not immediately return a request for comment."

(Photo is of John Leung and Bart Doyle in happier times. Backround is a map of the El Monte Transit Village.)
Posted by The Moderator at 1:27 PM