Why Is Susan Henderson So Excited And Happy About Us Paying More Taxes? 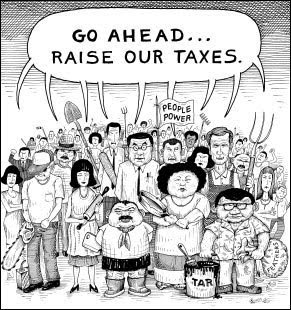 Week after week in the Mountain Views News we get the same steady drum beat about taxes. And what is that message? They're going up and there is nothing you can do about it. Nothing can change, no possible reform of City Hall can take place, and we are obligated to forever pay more and more money for services that frankly aren't as good as they should be, and show no clear sign of improving, either. Only becoming more expensive
And then there is Susan's red herring about "No new money." Unless somebody has been accusing City Hall of printing the stuff in a basement somewhere, it is really quite impossible to figure out where poor old Susan thinks "New Money" might have been coming from.
Now there is about $1,000,000 in previously unaccounted for money that turned up during the audits just completed. Audits that should have been done under the inept administrations of Joffe, Buchanan, and all those other people Susan supports so tirelessly. A breach in basic competence so egregious that the City was obligated to fork over $25,000 in fines to Sacramento. And had Sierra Madre continued the slack fiscal work ethic seen under those previous administrations so near and dear to the MVN, that money wouldn't have been identified and the surplus everyone is so proud of today might never have shown up on our books.
But, and as we can see from the following headline in the June 13th edition of the Mountain Views News (which hit the streets right on schedule June 14th), the canard continues, and in the largest possible type:
Sierra Madre State Of The City ... Mayor Confirms, "There Is No New Money"
No, and there are no flying pigs, abominable snowmen, werewolves, centaurs, firebirds, vampires, hydras, jabberwocks, orcs, rocs, or unicorns. And neither Odin nor The Mighty Zeus have paid us any visits lately, either. And I'm certain that if Susan had asked about the existence of any of those other equally mythological entities, Mayor MacGillivray would have denied their existence as well. As she should.
Nobody anywhere ever said there was "new money." This is nothing but an Urban Myth that Susan Henderson has invented so that she can actually discuss the fiscal accounting disaster left us from the Buchanan/Joffe shenanigan years. By constantly talking about an "extra million dollars" Susan is doing little more than attempting to avoid the elephant in the room. Which is that there was a million dollars in the accounts of Sierra Madre that the high solons of finance under those previous administrations didn't even know existed. It has only now been discovered because then Mayor Kurt Zimmerman, along with MaryAnn MacGillivray and Don Watts, got the job done.
And the major consequence of this "accounting correction," as the more politically correct prefer to term it? In April of 2008 the people of Sierra Madre went to the polls and voted themselves a 100% Utility User Tax increase based on numbers that were over $1,000,000 less than they should have been. They were told we had a deficit when in reality we had a surplus. That is the elephant that Susan Henderson doesn't want anyone to see, and why week after week she writes about this topic in the most delusional and bizarre of ways.
But all that aside, there is one other question here that needs to be asked. What is it that Susan Henderson is thinking? As we all know, Susan likes to consider herself to be the most profound of political managerial visionaries. And despite the defeats her two candidates experienced in 2008 (one of which was the first sitting Mayor to be unceremoniously dumped by the voters here in quite some time), she continues to maintain this most regal of poses.
So assuming that this woman of vast political wisdom is currently working on fashioning the electoral landscape for 2010, what is the message she is crafting for the poor fools unlucky enough to win her support? Well, from what I've been reading, it would seem to be something like the following:
"Taxes are going up, you're going to have to pay them, nothing can be done, nothing can be changed, there is no possible reform at City Hall, you voted for it, so shut up about it and prepare to dig deeper."
Now I certainly do not claim to be a political thinker of the caliber of Susan Henderson, but in an economy as lousy as this one, and in a State that is in both fiscal and political meltdown, that doesn't strike me as being quite the message of hope and optimism that people are going to want to hear very much of next year.
Posted by The Moderator at 6:00 AM