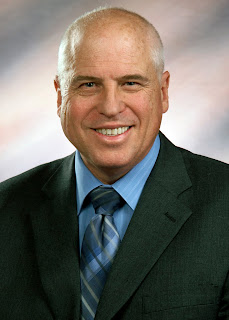 Don't you think that Joe Mosca and John Buchanan would just love to hire this particular consultant and have him stop by to "give staff some direction" on greenhouse gas issues? The solons running Pasadena actually did hire this guy, and paid him a bucket of taxpayer dough in the process. And what did they get for their money? Apparently they bought themselves a report that makes the lovely Rose City out to be an ecological wasteland on a par with the likes of Chernobyl.
The consultant we are discussing here is a Mr. Michael Hendrix, and he is the "air quality and climate change team leader" at the consultancy outfit PBS&J. Here is how they described Mr. Hendrix upon hiring him last July:
Hendrix is an authority on solving technical challenges related to air quality, greenhouse gas emissions, health risks, and acoustics. "Mike will help California cities cope with the increasingly urgent need to get out front of climate issues that are negatively impacting the state," said William S. Ziebron, PBS&J's California state director. "He'll be advising cities on how to measure their greenhouse gas emissions and will help resolve other air quality issues impacting plans of several cities..."
Now apparently Mr. Hendrix's rather controversial recent finding that Pasadena is the source of an incredible amount of nasty global warming emissions did not go completely unnoticed in the local press. And Pasadena Star News reporter Dan Abendschein captured the sense of confusion and alarm some on the Planning Commission experienced there upon hearing the bizarre conclusions contained in this consultant's report.
Study of greenhouse emissions questioned - Was it a miscalculation that resulted in Pasadena having the highest greenhouse emissions of any Western Hemisphere city? - Does Pasadena have the highest greenhouse gas emissions of any city in the Western Hemisphere? That was the question members of the Planning Commission asked after reviewing a consultant's plan aimed at reducing emissions to 1990 levels by 2020, as required by state legislation.
Consultant Michael Hendrix of PBS&J, a consulting group, used a complicated formula to calculate Pasadena's greenhouse emissions that took into account the number of vehicle trips residents make, the source of the city's utility power, and the amount of garbage the city emits, among other factors ... Compared to the handful of other cities that have made similar calculations, Pasadena's emissions could be the highest in the Western Hemisphere - about five times as much as Santa Monica and Berkeley, two California cities of similar size, according to the calculations Hendrix used.
Planning Commission members were understandably distressed by those estimates. "This makes us look like a West Virginia coal town," Commissioner Richard Norton said.
When you spend a lot of money on a consultant you usually get some kind of advice to go along with all that data. And certainly Mr. Hendrix had his recommendations. One of them just happened to be that Pasadena should zone for (wouldn't you know), even more high-density development than it is already struggling with.
Sadly, Mr. Hendrix's conclusions couldn't have come at a more politically embarrassing time. You see, there has been something of a mass case of buyer's remorse among the residents of Pasadena recently. This in regards to a huge infusion of downtown development in the past few years, the result of a previous General Plan. And with a new General Plan now in the planning stages, the last thing these concerned Pasadena residents wanted to hear was that this detested development had turned them into a notorius international air pollution and traffic pariah. The very things all that condo and mixed use construction was supposed to remedy. Or so they were told.
And now this Hendrix guy is saying that the way to solve the problem is to allow for even more development? Needless to say, that just didn't fly. And an incensed Pasadena Planning Commission had Hendrix strike it from his report.
So here is a question. Do cities investigate the consultants they are considering before actually hiring them? Because I did a very cursory internet search into this Hendrix fellow, and it seems obvious to me that his outre' recommendations should have come as no surprise. If you click here you will see an example of what I mean. Here are a few of the pertinent details from the cite:
Title - SB 375: A Proactive Approach for Local Jurisdictions - Inland Empire Chapter Program Association of Environmental Professionals, June 24, 2009.
Presentations by:
- Theresa Fuentes, City of Pasadena - Deputy City Attorney
- Michael Hendrix, PBS&J - Project Director - Air Quality & Climate Change
Involved Agencies:
- Metropolitan Planning Organizations (MPOs), AMBAG and MTC in the SF Bay Area, SCAG and the sub regional COGs in So Cal
As you can see by linking to this rather large deck (and it does go on), Hendrix is pretty much a garden variety "by-the-book" SB 375 advocate, and someone apparently deeply enmeshed in Sacramento's MPO policy enforcement apparatus. That he would have recommended a plan for yet another layer of unwanted high-density development in a city already way beyond capacity seems pretty obvious to me. Strip away the greenwash and that's what SB 375 is really all about. However, that the City of Pasadena would have to pay this guy a large sum of cash to find this out seems rather negligent to me. The internet could have told them all they needed to know about this fellow for free.
But maybe there is a career opportunity for somebody here. How about a consultant who would screen consultants for cities too cerebrally challenged to do the basic checks for themselves? Which is probably most of them. If you are currently unemployed and thinking of going into business for yourself, there really seems to be a need for this kind of service.
Tell them Eric Maundry sent you.
Posted by The Moderator at 7:00 AM