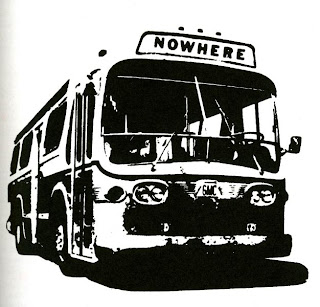 It has been awhile since we've had a talk about Sierra Madre's infamous Shenanigan Shuttle. In case you're not hip to these happenings, it all goes something like this. Any city that falls within what Sacramento and its various sock puppet regional planning associations term a "transit corridor" would fall prey to the vast redevelopment demands of SB 375. The idea being that if you enable vast swaths of new condo developments people will magically give up their greenhouse gas producing automobiles and forever and ever crave the joys of riding public transit. Which, given the sad state of public transportation in Los Angeles County, is tantamount to asking your average working stiff to await those infrequently scheduled flying pigs to whisk him off to work.
(As an aside, has it ever occurred to anyone that low income housing might actually cause more people to own automobiles rather than less? If people of a certain income bracket could pay less money for housing, wouldn't that free up some of their income to get the one thing they've always wanted? That being a car? So they won't have to ride the damn bus anymore? If the purpose of this massive social engineering scheme is to get people out of their cars and into public transportation, all as a way of saving the world from Global Warming, I'm not so sure it is going to work as advertised. More evidence that the minions of the central planning regime in Sacramento have little meaningful contact with the real world.)
Anyway, so here in Sierra Madre we do have our bustling Shenanigan Shuttle. Hardly anybody rides this "Gold Line Shuttle," and our little bus usually remains empty as it circles the town seeking riders in vain. The money for it comes out of some Sacramento fund, so it doesn't hit Sierra Madre's General Fund. Something we're all supposed to be giddy about, though I do seem to recall that I also pay state taxes.
So what does this Shuttle do? It connects us to the Gold Line (aka "210 Trolly"), thereby making us a part of the San Gabriel Valley Transportation Corridor. Which in the Brave New SB375 World means that we will be hit with RHNA numbers in 2012 that will make the last coerced state planning demands look like a pleasant visit from the folks back home.
Now wherever things go wrong for us, there you will find Bart Doyle. Does this guy only seem to be driven to transform this quaint little town of ours into California Condo Generica? His uncanny dedication and focus on these matters goes beyond anything mere mortals are supposedly capable of doing. And there apparently isn't a development relevant covenant in existence that he hasn't joined. You can only wonder what it is we did to deserve such unwanted attention.
There is an organization that goes by the name of the San Gabriel Valley Service Sector Governance Council. It falls somewhere within the shared jurisdictions of the SGVCOG and Metropolitan Transportation Authority, or Metro. And in July of 2004 our boy Bart Doyle was its Chairman. And in the Minutes to that meeting he discusses and advocates for, you got it, the buses we enjoy calling Shenanigan Shuttles.
Councilmember Spence commented that a five-city transportation consortium within the San Gabriel Valley that serves on SCAG (Southern California Association of Governments) has recently hired a consultant and that he would be happy to keep the Council abreast of positive developments in marketing and local transportation issues.
Chairman Doyle cautioned that the Sector may not be able to handle marketing issues on its own ...
Chairman Doyle reported that he met with the chairs of the other Sectors recently and that it was apparent that building increased trust with the MTA Board was a priority for all the Sectors. In addition he stated that the agency needs to consider carefully full integration of the Gold Line with the bus system, especially since this impacts ridership. Chairman Doyle emphasized the importance of having the sectors present a consistent message to the Board at the July 22 Regular Board meeting.
So there you have the omnipresent Bart laying out all the necessary ingredients for casting the San Gabriel Valley Transportation Corridor net as far and wide as possible. Gold Line shuttle buses and the onerous marketing demands it will take to get people actually use them. And the marketing that was eventually decided upon is telling of the difficulties the Bartster anticipated. It is heavily reliant on PC messaging, guilt trips, and other highly negative and coercive strategies. You evil car driving fiend, you.
Who would have ever thought that having a nice little trolly train running down the middle of the 210 could end up having such an impact on things such as RHNA numbers and our fight to maintain the unique qualities of our town?
One other thing. Wherever Bart Doyle goes, can Joe Mosca be far behind? It looks like his favorite hire has once again gone on to try and fill those mighty shoes.
Oh, and how many of the people pictured there do you think have gotten out of their cars and are now riding the bus? Like maybe ... none?
Posted by The Moderator at 7:00 AM