Development @ the Skilled Nursing Facility: Will It Lead to Our First Measure V Vote? 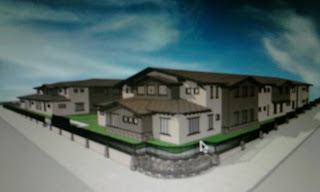 I don't know how we missed this one. You'd think Measure V would be a core issue for The Tattler, and that it would be the first thing we'd think of. But nobody here did, and that will take a little soul searching on my part. Fortunately we have commenters here who call us out out when such a thing is needed. And obviously in this particular case it was needed.

The topic is the Skilled Nursing Facility, or, as the Fountain Square Development folks would prefer us to think, the Senior Assisted Living Facility. And there will be a neighborhood meeting (so-called) about this very topic on September 7th at 6:30 PM, held in the fabulous Sierra Madre Room. It is there that we are to gather and learn what it's all about, and then decide whether we like their what they're putting down. Or not.

And thanks to one aware reader who posted on this site yesterday, we now have a very important question to ask. Here is that comment:

Everyone seems to be missing the elephant in the room.

The "Assisted Living" project being proposed for the old Skilled Nursing Facility calls for 96 units for "residents" not including additional units for employees.

This project MUST go before the Voters to be approved!

Now I cannot vouch for all the numbers here, though judging from the photo I've posted above, this is a pretty immense project. And I have heard a few complaints about its potential height. You won't be getting any of our famed mountain views when you stand before so mighty a structure as this one.

So if what I have reposted here today is accurate (and I am trusting in The Tattler readership to put that to the test), I'd say we could very well be heading for our very first Measure V election.

And I have to ask. Did you ever think it would take this long?

Our friend Wayne Lusvardi, who runs the Pasadena Sub Rosa blog, is also one of the featured writers at the Cal Watchdog news site. Which, for my money, is one of the better California political blogs around. And the provocative title above, which I shamelessly liberated from that site, comes from an article Wayne posted on that site yesterday. Here is what he's laying down:

... an important discussion is needed about the sustainability of public housing in Pasadena. In the London riots, the "austerity" budget of new Conservative Prime Minister David Cameron has been blamed, though he denies it.

Those in the Democratic Party correctly perceive that what is forthcoming is the end or unraveling of the welfare state in the United States, not due to hate, but to a lack of money. This is why there is so much psychological reversing of animosity and scapegoating on to those in the Tea Party who, welfare recipients perceive, want to take away welfare benefits.

Just this past weekend, Rep. Maxine Waters, D-Los Angeles, attacked the Tea Party. "This is a tough game," she said. "You can't be intimidated. You can't be frightened. And as far as I'm concerned - the Tea Party can go straight to hell."

But if the Tea Party were not there, the reality would not go away. California is stuck running annual $20 billion budget deficits and the federal government is arguably broke when balloon payments on future social entitlement programs are factored into the balance sheet.

It is a good point. What exactly will the effects of the vast cutbacks in state and federal entitlements be once they hit? How will those most affected react? Things might get as wild here as they have in other parts of the world.

(Ed: The e-mail I am posting below showed up in my mailbox yesterday. It was sent to me by a good friend, but you might have received this recently as well. It apparently has been getting around. The piece is called "The Green Thing.")

In the line at the store, the cashier told an older woman that she should bring her own grocery bags because plastic bags weren't good for the environment.

The woman apologized to him and explained, "We didn't have the green thing back in my day."

The clerk responded, "That's our problem today. Your generation did not care enough to save our environment."

He was right -- our generation didn't have the green thing in its day.

Back then, we returned milk bottles, soda bottles and beer bottles to the store. The store sent them back to the plant to be washed and sterilized and refilled, so it could use the same bottles over and over. So they really were recycled.

But we didn't have the green thing back in our day.

We walked up stairs, because we didn't have an escalator in every store and office building. We walked to the grocery store and didn't climb into a 300-horsepower machine every time we had to go two blocks.

But she was right. We didn't have the green thing in our day.

Back then, we washed the baby's diapers because we didn't have the throw-away kind. We dried clothes on a line, not in an energy gobbling machine burning up 220 watts -- wind and solar power really did dry the clothes. Kids got hand-me-downs from their brothers or sisters, not always brand-new clothing. But that old lady is right; we didn't have the green thing back in our day.

In the kitchen we blended and stirred by hand because we didn't have electric machines to do everything for us. Back then it was a quieter kitchen. One could talk and be heard over all that stirring by hand.

When we packaged a fragile item to send in the mail, we used a wadded up old newspaper to cushion it, not styrofoam or plastic bubble wrap.

Back then, we didn't fire up an engine and burn gasoline just to cut the lawn and edge it. And we used clippers to shape our bushes. We used a push mower that ran on human power. We exercised by working so we didn't need to go to a health club to run on treadmills that operate on electricity.

But she's right, we didn't have the green thing back then.

We drank water from a fountain when we were thirsty instead of using a styrofoam cup or plastic bottle every time we had a drink of water. We refilled writing pens instead of buying a new pen, and we replaced the razor blades in a razor instead of throwing the whole razor away just because the blade got dull.

But we didn't have the green thing back then.

Back then people took a streetcar or a bus and kids rode their bikes to school or walked instead of turning their moms into a 24-hour taxi service.

We had one electrical outlet in a room, not an entire bank of sockets to power a dozen appliances. And we didn't need a computerized gadget to receive a signal beamed from satellites 2,000 miles out in space in order to find the nearest pizza joint.

But isn't it sad the current generation laments how wasteful we old folks were just because we didn't have the green thing back then?

Please forward this to another selfish old person who needs a lesson in conservation from a smart alec young person.

http://sierramadretattler.blogspot.com
Posted by The Moderator at 4:00 AM