A Candlelight Vigil, and a Canadian Prosecutor Cites U.S. Homeland Security Negligence In the Matheson Case 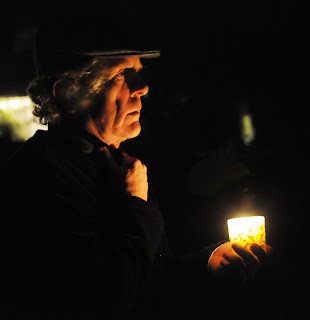 Thank you to everyone who showed up to the candlelight vigil at the Matheson residence last night. It was a quiet and dignified expression of respect for the victims of the crime of child pornography. Notably present was Sierra Madre's Hometown Hero, John Shear. Additionally, rumored City Council candidate Carol Canterbury was there as well, though she chose to remain in her car. Most assumed it was because of the biting December chill in the air.
Both the Sierra Madre Patch and the Pasadena Star News have already published reports on the gathering, with many of those attending being interviewed by their on-site reporters. Click here and here to access. The Sierra Madre Weekly's Terry Miller also covered the event, and has supplied The Tattler with a series of excellent photographs, including the one we have posted here.
As of 7:30 this morning, the Candlelight Vigil story is the #1 "Most Viewed" article on the Pasadena Star News website.
Additionally today the Pasadena Star News has filed a report that I believe could lead many concerned people to question the commitment of U.S. Homeland Security officials regarding the protection of American citizens from criminals involved in the production and dissemination of child pornography. It is a shocking report. Click here to access the entire article.
Canadians: US Homeland Security knew of Sierra Madre man's porn case in October - The Department of Homeland Security's failure to search Robert Matheson's home in Sierra Madre immediately after his arrest for smuggling and possession of child pornography may have cost Canadian authorities the chance to secure a harsher sentence, officials in Nova Scotia said Wednesday.
Matheson, 67, was arrested Oct. 17 at the Halifax Stanfield Airport in Canada after border agents discovered 2,820 pornographic images and 285 videos of teenage boys. Most of the pictures showed teenage boys engaged in sex acts, said Craig Botterill, Nova Scotia Crown Attorney and the lead prosecutor on the Matheson case.
Canadian law enforcement officials contacted the Department of Homeland Security's Los Angeles office about Matheson's arrest on Oct. 20, they said. But federal agents didn't search his home until Monday.
The delay compromised the Canadian case against Matheson, Botterill said.
"(The delay) prevented me from painting a full picture of the accused at the sentencing hearing," Botterill said. "We wanted to know whether he was a person with a small amount of child porn on his computer or whether he was a big-time player."
Matheson, who hosted the 2010 campaign kickoff for former Sierra Madre Mayor Joe Mosca and is a member of the foothill city's Chamber of Commerce, was sentenced to 120 days in prison on Dec. 13.
Canadian officials still don't know what evidence was found in Monday's search. But had American investigators found a cache of porn stashed in Matheson's home or on his desktop computer, Botterill said he would have been able to argue that the Sierra Madre man deserved more time and may have been able to ascertain whether he was "involved in the filming of the videos."
Matheson's lawyers seized on the delays by American federal agents and pressed for the expediting of the trial, a right protected by Canadian law in the same way it is protected by the U.S. Constitution, Botterill said.
"His lawyer was very clever (in) getting him to plead guilty as soon as he could. Typically in Canada it will take six to nine months between the time you get arrested and a sentencing date," Botterill said. "I think his attorneys wanted him to plead guilty before the American authorities could finish their investigation, so we would know the least about him and he would get a lesser sentence."
As we have said on this blog before, a possible ramification of the 8 week delay by U.S. Homeland Security in searching Matheson's house in Sierra Madre could mean that accomplices of the convicted child pornography trafficker could have scrubbed the place clean of all incriminating evidence.
After all, Matheson's youthful male companion on his fateful journey north was allowed to return to the U.S. by Canadian officials, and could easily have visited his home here. Additionally, Matheson's roommate, presumably still living at this house, might also have taken advantage of the two month delay and sanitized the residence.
Could this possibly result in Matheson being set free after his relatively short sentence in Canada is fully served and he is deported back to the U.S.?
If that is the case, convicted child pornography smuggler Robert Matheson could soon be back and, within a few short months, once again walking the streets of Sierra Madre.
http://sierramadretattler.blogspot.com
Posted by The Moderator at 2:20 AM