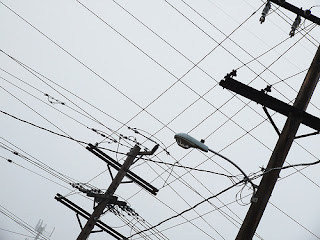 There is an interesting article up on the Pasadena Weekly's website entitled "Power Vacuum" (click here). It compares the performances of Southern California Edison and Pasadena's city-owned Pasadena Water and Power during the recent windstorm. It is the kind of stark match-up that you would expect the privately owned Edison to win easily. After all, aren't most privately owned business entities vastly superior on the service tip to their old and dowdy city government owned rivals?
Of course, in this case we are talking about a utility monopoly whose authority is so complete and utterly unchallenged in the cities where it operates that it actually does function in a kind of quasi-governmental sort of way. Edison, as a monopoly so deeply entwined with the City Halls in those municipalities it serves, can hardly be considered a purely capitalist operation. That would involve things like competition and an available array of alternative options for consumers to choose from. Obviously we have none of that sort of thing here.
And as we have seen in some of the recent City Council discussions on solar panels, even if you choose what should be the "off the grid" option of solar energy, Edison will still be there to collect money, especially the City's UUT hit. Which to me takes away the one real appeal of going solar. As the producer of your own electricity through the purchase of expensive solar power panels and associated equipment, shouldn't you be permitted some level of independence from all that?
So how did Edison stack up against Pasadena Water and Power? According to the Pasadena Weekly, not so very well. This from John Grula of the Southern California Federation of Scientists:
Even taking into account its larger size, Pasadena was perhaps the hardest hit of all the communities, with at least 1,200 downed trees and $20 million in damages. The wind gusts in Pasadena were as high, and perhaps even higher than, winds in surrounding areas. Nevertheless, according to Erica Rolufs, a spokesperson for PWP, only 10 percent of PWP customers (businesses and homes) lost power. Among those that did, within 48 hours the number of customers without power had been reduced to less than 1 percent.
How did it go for SCE customers? According to the Pasadena Weekly and the Valley Sun, the entire town of Altadena experienced a complete blackout. Everyone I know in Altadena lost power, including me. In La Canada Flintridge, 100 percent of homes and businesses lost power, according to Rabo Parseghian, a management analyst in Public Works. Sierra Madre? More than 90 percent of residents and businesses lost power, according to Public Information Officer James Carlson.
The other SCE cities John Grula cites here are Monrovia (75-80% outages), San Marino (100% blacked out), and Temple City (75% of SCE customers lost power). Grula then goes on to make this rather telling observation:
So in terms of maintaining the delivery of electricity during a bad windstorm, it is obvious that PWP was far superior to SCE. In addition, there have been numerous reports about how slow SCE was in restoring electricity to its powerless and shivering customers.
SCE's performance was so bad, that it has been roundly criticized by politicians across the political spectrum, from Democratic Congressman Adam Schiff to Republican LA County Supervisor Mike Antonovich. Furthermore, on Dec. 7 the California Public Utilities Commission (PUC) announced it will investigate the reasons for the "prolonged power outages" in SCE's service area. Until now, the PUC has not launched an investigation of any other Southern California utility.
All pretty much damning evidence showing that power goliath Southern California Edison just could not get the job done right for its customers. And just to throw in my own anecdotal evidence of Edison ineptitude, when our uber utility was whining (there is no other word for it) about how debris blocked streets and downed trees were making it impossible to get equipment into many Sierra Madre neighborhoods, I had a ridiculously large crane at my house at the top of Grove Street pulling a 16 ton eucalyptus tree off my roof. The red tag I had received from the City for having that bad boy draped across mi casa was gone after one single day.
In a purely market driven economy we as consumers, faced with such disastrously bad service, would normally have the option of taking our business elsewhere. So do we have the option of turning our back on SCE and choosing another utility company? Maybe even Pasadena Water and Power?
Look at it this way. We do share some things with Pasadena, including a public school district. It is possible for us to share services with our rather large neighbor to the west. So why can't we ditch the failed utility we are stuck with now and opt for a company with a record for superior service?
Of course, Edison's decrepit infrastructure here might be so bad that PWP couldn't afford to take us on. I don't want to get anybody's hopes up too high.
But that said, I think that the City of Sierra Madre should start exploring our options here. The abused and poorly served electricity consumers of Sierra Madre deserve just that kind of hearing.
Extra! Vote in these Pasadena Star News polls
2011 Top Stories Vote: "A 90-year-old Santa Anita employee saves 6-year-old girl from runaway horse." Click here and scroll down a little. Look left.
Also: "Do you agree with the State Supreme Court decision on redevelopment agencies?" Click here and scroll down to around mid-page.
http://sierramadretattler.blogspot.com
Posted by The Moderator at 5:00 AM