John Shear Back At Santa Anita 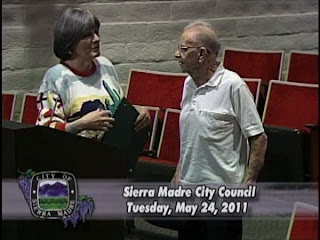 I figured that after all that has been going on this last week or so we are due for a little good news for Christmas. Certainly we have all behaved ourselves and are fully deserving of something along those lines. And we have got a really nice story to share with you today. This from a press release (click here) sent out by Santa Anita:
Heroic Paddock Guard John Shear Back In Action - Longtime Paddock Guard John Shear, who was seriously injured while protecting a young girl from a loose horse on March 12, was a Santa Anita press box visitor Thursday and informed that he would be back in action on opening day. As a result of his heroic act, Shear has been honored by the cities of Arcadia and Sierra Madre.
"My doctor said I'm okay to come back to work," said Shear, who will turn 91 on Jan. 17. "I'll be back at my same job, which is Paddock Supervisor. I've been doing a lot of physical therapy and I can't wait to get back to work, to see all the people."
"John is a fabulous person and a great employee," said Santa Anita President George Haines. "Having him back with us on opening day, after all that he's been through, is a dream come true and we know there are many, many people who are looking forward to seeing him back at work."
So not only is John Shear someone who performs heroic deeds, or is about to celebrate his 50th Anniversary of working at Santa Anita, but he also is a guy that gets incredible job performance reviews from his boss. Some people just have it all.
The horse racing season at Santa Anita kicks off on Monday, December 26.
There is a great article entitled "Three San Diego authors, three inspirational stories" that can be found in the Dec 21 edition of the The San Diego Examiner (click here), and it mentions John Shear in a unique way. For this piece they interviewed three noted San Diego authors about who it is that inspired them this year in their work and life. One of those authors, T. Jefferson Parker, gets his choice written up this way:
Bestselling author, T. Jefferson Parker, whose newest book, "The Jaguar," will be released on January 10, 2012, provided the story about 90-year-old Santa Anita paddock guard John Shear. Parker said, "It was Shear's job to keep the horses away from fans in the paddock area, and he'd been doing that job for fifty years. But last March a horse broke away and was running for an opening in the fence. The crowd scattered but a small girl was standing there alone and Shear ran in and threw her out of the way."
Shear suffered multiple injuries including a pelvic fracture. Bill Plaschke of the LA Times interviewed Shear and recalled this quote. "I'm 90-years old and she's six. She's a little girl, she has the rest of her life ahead. I've pretty much lived my life. This is just something a man does."
Kind of puts things like life and what is really important into perspective. It is a good time of year for that sort of thing.
http://sierramadretattler.blogspot.com
Posted by The Moderator at 3:00 AM