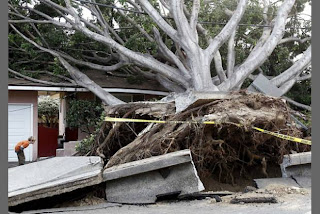 You may recall that here in Sierra Madre the clean up after the windstorm of a month ago (where has December gone, anyway?) was dependent upon us receiving Federal and State aid to help remove all of that debris we had just pushed out into our streets. Without such aid the funds required to do the job would be a budget buster that would pretty much clean out the City's General Fund, and then some. And it was only after our receiving this cash was assured that the clean up could commence in earnest.
Earlier this month we were honored with a visit from Anthony Portantino and a FEMA guy, who then drove around town with Councilmember Nancy Walsh to assess the windstorm damage related to our just declared State of Emergency. With a report on all of that gathered information to be later generated and then sent up to Sacramento for careful review. Nancy reported upon her interesting experiences that morning at an ensuing City Council meeting, and did so in a way that seemed to indicate that disaster relief funding was on the way and the City would soon be saved from tree debris and other storm related effects.
Today the streets are pretty much tidied up and all that tree debris has vanished to wherever it is such stuff goes after it is collected. But can it be that the money to pay for all of that work is also gone as well? As in we're not going to get any of it? An article in today's Pasadena Star News (click here) would seem to indicate that this early cheer might have been a case of Unsubstantiated Overly Optimistic Reality Creation (UOORC).
Beck: Federal disaster aid gone with the wind: (PASADENA) - City officials said Friday that cumulative costs from the recent windstorm will not reach the necessary threshold for federal disaster assistance, forcing them to now pursue state assistance instead.
"Unfortunately, it is now clear that the cumulative costs of the disaster will not reach the statewide public sector threshold of $50.3 million to make us eligible for federal reimbursements," City Manager Michael Beck wrote in a city manager update, noting that current estimates of eligible public sector costs are about $33 million.
The city will instead focus on seeking state disaster funds from Gov. Jerry Brown.
However, Beck said that California Disaster Assistance Act funding is currently $140 in the red based on previous obligations "so this effort may be fruitless."
Not a cheery prognosis. Hopefully the City of Sierra Madre had made other arrangements and none of this will apply to us.
With the New Year comes New Laws!
A newspaper from way out there in the Inland Empire called the Daily Bulletin (click here) has put together a list of all the fine new laws that will take effect once the clock strikes midnight this evening. You as a law abiding Californian will need to be made aware of what it is that is expected of you in 2012.
Citizen, here are your new laws:
1) The Dream Act - Legislation allowing students in this country under less than legal conditions to receive financial aid for things like a college education kicks in at midnight.
2) SB 746 - If you are under 18 you will no longer be allowed to legally use a tanning bed. The effect this could have on today's already stressful teen lifestyles could be immense.
3) If you own a farm and are found to have violated farmworker union election rules you could find yourself in a world of hurt. In case you are concerned, there is no indication that this new law applies to lawn guys.
4) SB48 - The requirement here is that public schools include upbeat history lessons on the lesbian, gay, bisexual and transgender communities. Though this law takes effect tonight, new textbooks reflecting this state mandated curriculum change will not enter the system until 2015.
5) Shark Fins - They are within hours of becoming a controlled substance in California. If you are traveling today you will need to know that similar laws already apply in Guam, Oregon, Washington and Hawaii.
6) Caffeinated Beer Ban - Here is a lifestyle killer. Apparently some college students drank too much of this stuff and had to be hospitalized. Of course, if everything college students drink too much is outlawed, we'll probably be back to prohibition by July.
7) HPV - Kids as young as 12 can now be vaccinated for human papillomavirus without letting their folks know. I am not sure what the origin of this legislation might be, but I imagine that pro-human papillomavirus parental groups are probably going to be pretty upset about this.
Here's hoping that we all get through 2012 in one piece.
http://sierramadretattler.blogspot.com
Posted by The Moderator at 4:00 AM