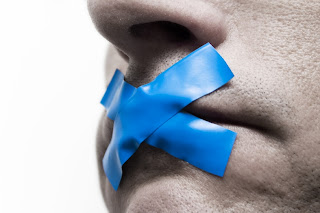 Yesterday, and at the behest of City Manager Elaine Aguilar, each of the candidates running for City Council was told something that she felt was very important for them to know. It was stated to the candidates in a phone call that if they were to speak at tonight's Planning Commission meeting on the Measure V/Assisted Living Facility question, and if they were to express an opinion either FOR or AGAINST the ALF project, they could be putting themselves in some serious future jeopardy.
These calls, which were made by a surrogate, are being followed up today by calls from Elaine herself.
And what would that jeopardy be? If any of them were to speak their minds on this topic tonight, and were they later elected to the City Council, each would then have to recuse themselves from ever discussing the issue in the future because they would have already expressed an opinion. And because of this they would somehow lack for an open mind on the project should it come before any City Council they might be serving on. And the legal basis for this? According to Elaine Aguilar, such restrictions on the free speech of yet to be elected candidates is required by the Brown Act.
We are providing a link to the League of California Cities pamphlet on the Brown Act (click here) for you to look over. When you read this document you will clearly see that while the Brown Act does apply to recently elected but yet to be sworn-in candidates, it in no way applies to people who have not been voted into office by the electorate.
Elaine Aguilar's claims here have no legal basis and are apparently bogus. And how could they not be? Can you ever imagine a law that would make someone running for office legally responsible for every comment they have ever made? As they were originally stated? And after having been elected anything they might have said previously could possibly prohibit them from ever deliberating on these particular topics once on the City Council? What if they changed their minds?
By that logic Councilmember Josh Moran would have to recuse himself from any deliberations regarding the Measure V aspects of the ALF question because of the vociferous oppositional statements he made on the topic of this slow growth initiative back in 2007.
And can it really be that Elaine Aguilar is stating that no candidates can talk about this issue in particular during their campaigns, and should any resident ask about it they will have to tell people they can't answer their question because of the Brown Act? I'm sorry, but Elaine is speaking complete and utter nonsense here.
The apparent reason for Elaine's claim is that there is something of a panic at City Hall about tonight's meeting. What was originally supposed to be an obscure Planning Commission adjustment to some language used in the building code to define what a "unit" in a building project might be, has now been exposed as being something quite different. With many people having awakened to the fact that this is in reality a full-on attempt by the City to circumvent the resident approval requirements of Measure V.
We discussed this at length earlier in the week in an article you can access by clicking here. The Planning Commission meeting tonight is a high stakes gamble by the City to change the Measure V ordinance so that a resident vote will not be triggered during the approval process by the developer's out of compliance plans for the ALF. Mayor John Buchanan and Mayor Pro Tem Josh Moran, backed up by Colantuono and Levin (the law firm that we the taxpayers pay $250,000 a year to work against our interests), want to remove resident rights to vote on downtown development from the equation. And the way they plan on doing this is by illegally manipulating the voter approved definition of "dwelling units" in this ordinance.
So why this transparent malarkey about unelected candidates being bound by Elaine's novel and quite fallacious interpretation of the Brown Act? Obviously City Hall is worried about the level of opposition that will be directed their way tonight, and are now making a serious effort to silence some of this community's leaders. That being the folks running for City Council.
Unfortunately for City Hall, however, our candidates can read the Brown Act all by themselves. And I am happy to inform you that the efforts of the City Manager to coerce them into silence have apparently failed rather miserably. And the candidates that authentically care about saving our hard won right to vote on downtown development questions will be heard this evening.
You really need to be there and support them.
http://sierramadretattler.blogspot.com
Posted by The Moderator at 12:00 AM