Did the City of Sierra Madre Spend CRA Money On Things It Shouldn't Have? 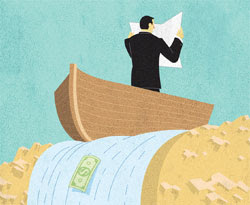 You have to wonder what the consequences are going to be. The City is in the hole for $800,000 this year alone. There is also the matter of how much other CRA debt was also accrued in recent years. Have we been told about that yet? And should the City of Sierra Madre be audited by Sacramento as part of their $1.7 billion CRA rake back, will they conclude that much of our portion of the pie was not legally spent and demand that we give a lot of it back?

We could be in for a lot of trouble here. The catch being that nobody is really going to know for sure how much trouble at this point. And that includes the people running this town. I'm sure the City understands its potential exposure, but whether or not Sacramento will actually go to the long knives, or if they do, point them in our direction, is still up in the air.

According to City documents our Community Redevelopment Agency (RIP) has three appropriation funds. These are operational/agency appropriations, debt appropriation, and low-mod housing appropriation. Additionally, the Agency shared approximately 20% of the allocated cost in the Administration, Public Works and Development Services. But were they involved in the kinds of legally valid CRA projects that would justify the use of so much of the Agency's funds?

And that is where much of the trouble lies. As an example, the City's CRA (Redevelopment Agency) numbers from the current budget:

The catch is Sierra Madre does not have any real redevelopment or CRA-style projects underway right now. Despite what you might have heard from one elected fool (click here), Sierra Madre doesn't have any of the kinds of blight fighting projects CRAs were created to fight. Plus the Senior Care Facility is pretty much rolling along now, with only upkeep and rent collections to worry about. And the low-mod housing project on Highland isn't really even a project yet. The residents there stopped it dead in its tracks last year, and ever since nothing much has happened. Nor is the ALF really underway, and isn't the developer picking up most of the existing planning costs anyway?
All of which will make justifying a $267,418 spend on Development Services personnel (salaries, retirement, benefits) hard to explain to auditors from Sacramento should they be sent our way.

Cities all over the State of California have been using their CRAs as a piggy bank. The question is how much money was taken out of that piggy bank, and what exactly was it used for. With no truly valid new CRA projects in existence, the Development Services spend alone looks extremely suspect.

What's possibly illegal here is the use of a big portion of the CRA's allocation on things that are either marginally, or not at all, related to legitimate CRA projects. The numbers we are seeing here, put under the magnifying glass of a state auditor whose mission is to reclaim as much money as possible, could end up looking rather suspect.

Here is another thing. Our state mandated City audits are once again late. According to people that I spoke with this afternoon, the City of Sierra Madre has only now hired an auditor to do the numbers. Which means we are not just way behind schedule once again, but could end up turning our audit in over a year late. The State requires that every City must generate its annual reports in timely manner, and they must come with an audit. Without fail. With no report or audit from us to refer to in Sacramento, we will attract the interest of people we'd rather avoid at this point.
Being a year behind could make us a target. And this is definitely the wrong year to be late with our paperwork.

At Tuesday's City Council meeting Josh Moran aired out the prospect of cuts being made in areas that will directly affect residents. These being due to the loss of CRA funds. Those targeted included such traditional hostages such as the Library and Community Services.
However, neither of these hostages have received CRA funds, and therefore would make them odd targets for cuts.

Of course, the real reason for this move by the Councilman is politics. Threats to things such as our Library almost always generate an emotional response in our City, and this would help Josh and his allies to free up some city General Fund reserves to prop up CRA concerns that are their real source of interest.

It is good to see that as our City slips into serious financial crisis at least some of our elected leadership is willing to stoop to scare tactics and demagoguery to achieve narrow ends that are irrelevant to solving any real problems.

Credit rating agency Moody's Investors Service downgraded by one notch all California tax allocation bonds rated Baa2 and above. Moody's is monitoring all other redevelopment bonds and may issue a downgrade in the future.

It is nice to know that those CRA bonds we will be struggling to keep up payments on are settling down into a rating somewhere close to junk. It appears that Moody's is aware of the huge financial pressures cities such as ours are now going through, and they fear the potential effects on CRA bonds.

Apparently things are bad all over.

http://sierramadretattler.blogspot.com/
Posted by The Moderator at 5:00 AM