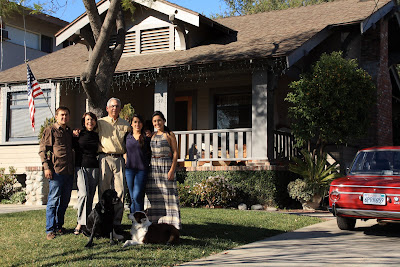 John Capoccia has written a very thoughtful and dare I say it wise "Local Voices" blog column for the Sierra Madre Patch, and it isn't getting much traction over there. I have no idea why that might be so.

I am not here to launch any criticism at our Patch pals you might be relieved to know. They certainly have improved the site from the rather twee and counterintuitive nonsense it lived on in the past. Publishing John's column is a good indication of that. And they are trying to bring some meatier political fare to those who choose to graze there, so you'll hear no criticism from me on that topic today.

But why John's blog post is not attracting the kind of interest it should, as it certainly would have had it been posted here, is a mystery to me. You'd think Patch readers would enjoy the give and take of lively political discussion just the way Tattler readers do. But for some reason they do not. And while there can be interesting conversations (the Brandenburg family's struggle with the PUSD is particularly gripping), for the most part the folks there would apparently rather concern themselves with other, and for me, far less engaging things.

So rather than allow John's post to sit neglected, I thought I would pull out a couple of passages that I found to be important and open them up for discussion here. It really is a strong column, one that shows John Capoccia to be a reasonable man endowed with good sense and a keen understanding. It needs to be read and discussed.

My mother lives in an Assisted Living Facility. She refers to her room as "My Apartment." I told her about the controversy here in Sierra Madre regarding the proposed Kensington Assisted Living Facility. I explained that the developer does not agree with her. The developer says her apartment is really not an apartment or a "dwelling unit" because it doesn't have a kitchen.

Some other things about her apartment. She receives mail that is sent specifically to her address. Her address is different and distinct from her neighbors. She has her own key. Her apartment is not shared by any other residents.

So what is ambiguous about the definition of a "dwelling unit?" If she isn't living or dwelling in her unit, then what is she doing in there day after day?

Out of all the things I have read about the Kensington ALF controversy here in town, this is the first piece I have seen that actually addresses the issue from the persepctive of those who might choose to live there. The key words here being "might choose."

The Kensington ALF will hardly be a fleabag or a flophouse. Nor will it be warehousing for old people. This will be a very expensive place to live, and I suspect that only those who can produce proof of significant worth in this world will be permitted to pass through its doors. And people with that kind of equity not only have options, but are used to exercising them. And I can't imagine that they would opt to live anywhere except in a place that they can feel is their own. One with a door and a lock. That is what people who have lived independently all of their lives would demand for that kind of money.

What the City has been describing, however, sounds at times almost like some sort of communal arrangement. Common areas and a common dining room, with the only place the residents there could retreat to for privacy being a bedroom, which would only be a space attached to a thoroughfare filled with not particularly happy strangers.

I'm not sure that is what privileged ALF residents will want. As we saw with John Capoccia's proud and independent mother, that is not the kind of thing people who have been successful all their lives would choose for themselves. And if they can afford the $4,500 or so a month it would take to live at the Kensington, they do have options. They will demand units, and the Kensington people know that. Which is really what the ALF will be providing. For that desirable market, there is no other business model possible.

The developer's calculus baffles me. It appears that they believe that Sierra Madre is comprised of BANANAS (Build Absolutely Nothing Anywhere Near Anything). There are a few of them around to be sure, but they are not the majority of Sierra Madreans. Most folks I've talked to speak very favorably of the project. They are anxious to see the existing eyesore in the middle of our downtown replaced with the proposed beautiful craftsman-style structure. They're also enthused by the prospect of additional revenue flowing into the city's coffers and excited about the overall boost to the local economy that the project would provide.

I believe that if the developer submitted the project to a vote of the people as required by the Voter's Empowerment Ordinance, it would pass by a resounding majority. However, it appears that the developer believes that the path of least resistance is to methodically dismember a plain, common understanding of what it means to live somewhere, and to scare up a controversy over that so-called ambiguity to serve their own interests.

Personally I prefer the term LULU - Locally Unwanted Land Usage - but that is just me.
John has identified the great mystery in what is happening here. Did Billy Shields and his partners really invest a king's ransom in this project just so he could get himself embroiled in an ongoing Sierra Madre political and land use controversy? Doesn't he understand that if he followed local law and put this project to a vote, not only would he win, but we'd probably throw a parade for him?

Instead Billy's ALF has become the catalyst for reigniting a near civil war in town that should have ended once and for all in 2007 when Measure V was voted into law. What is in it for him? Is he being used? Is he that naive? It just doesn't make any sense on the business level.

Either someone has been filling Billy's head with some really bad advice, or he just hates people voting on projects such as his. And if the latter is true, it would have to be one of the strangest occurrences in this town, a place noted for its often bizarre development behavior.

To locate John Capoccia's column in full, please click here. It is entitled "Leveraging a Definition of 'Dwelling Unit.'" You'll need to scroll down to around mid-page to find it. Go check it out.

http://sierramadretattler.blogspot.com
Posted by The Moderator at 4:00 AM