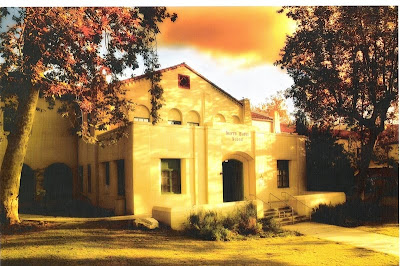 I attended the Sierra Madre Summit at the Sierra Madre Elementary School last night, which to my way of thinking wasn't quite a summit. The parents there were summit material, of course. After all they not only send their kids to PUSD's easternmost holdings, but also pay the taxes that enable all of that. However, the other side, the folks up there on stage with the chilled water bottles, were actually high ranking employees. Had this been a true summit the Board of Education would have been up there answering the questions. Rather we were treated to a lot of highly cautious "to the best of my knowledge," and "while I cannot see into the future it is my fervent belief" kinds of answers. Obviously nobody there wanted anything bad to get back to the boss. They were careful to a fault.

The audience questions had to be written out on 3" x 5" cards, of course, which were then cherry picked during this purported dialog. Usually that sort of thing is done when there are large crowds of people at a meeting, and then to account for the limited time. But there weren't really all that many people there last night. True discussion, had it been desired by the high ranking employees who didn't want to upset their bosses, could have been possible. This "Staking of the Stakeholders" process (SOTS) included lectures to those parents from the discussion moderator about speaking out of turn during some of the evening's more evasive moments. Something that had an "adult versus kids" kind of feel to it. As if the parents of school children were in some ways children themselves, and the teachers were there to teach them, too. Please, control yourselves. We'll get to your concerns in a moment.

Considering the job these people have done, perhaps they are the ones who should have been filing out the cards. I swear, if I had heard the phrase, "mistakes were made" one more time, I too would have started speaking out of turn. Well, OK. I did. I guess it is a personal weakness of mine. I don't react very well to be talked down to.

There was also some rather inappropriate jolliness on the part of those who had assumed the adult role. Not to be too humorless about it, but oftentimes I did not quite get the joke. An example is when the discussion turned to campus safety, an obvious concern due to some of the recent horrific events in this country. The matter of Bob Matheson and the inappropriately rapid discarding of school visitor registration records came up. The responses from behind the chilled water bottles were a few reassuring bromides about new concerns for security and safety, followed by a dais pleasing joke from the event moderator. I am sure this was done in hopes of easing some of the uncomfortable tension created by this topic, but it wasn't right. Sometimes things really are horrible, and need to be treated that way.

I filled out a card, which never got read. The question was this. "Why was Sierra Madre denied a seat on the Board of Education until 2015, two years after a majority of the new subdistricts?" To be fair, this was obliquely dealt with, but in a legalistic and obviously pre-arranged fashion. That duty fell upon the one Board of Education member in attendance, the somewhat tragic Scott Phelps. Obviously the lawyers felt that this one was too important to let the employees screw up.

The solution, which is really no solution at all, is to have temporary Board of Education members selected for those subdistricts who had their BOE seat stolen during the so-called "sub-districting process." Of course, those temporarily appointed persons would be selected by some of the very same people who stole your vote in the first place, which actually makes things worse. Think about it, the people who took away your vote are going to pick your representative for you. That person will then warm a seat at Board of Education meetings for two years, in the process becoming an incumbent. That person will then run for office in 2015 and, backed by the kind of money and political smear machine the school wreckers possess, will likely win. Which means you will then be denied your right to vote for a school board rep twice. Once by flat out having your vote stolen, and the other through the usual Pasadena machine politics and nastiness that so clearly typifies a PUSD election.

The one thing that I took away from all this is that the PUSD is actually very concerned about the "no vote" issue. There is colossal potential for a lawsuit here. If I had a sixty thousand or so dollars to play around with I would do it myself. Denying a portion of the taxpaying community the right to properly elected representation on things that involve the spending of their money is the kind of legal grist that gets faithless public officials long jail terms. Plus it could potentially cost the PUSD millions in legal costs, further crippling an already badly damaged school system. They were not looking to air this one out last night. The vote issue is at the radioactive core of the PUSD Chernobyl.

The auditorium at the Sierra Madre Elementary School is a beautiful room. And the staff and kids there have made it even nicer with the creative and even moving murals they have placed on the walls. My favorite is the one done for Mesopotamia. If only we had a lion's head to guide us now. But it is all a kind of tragic metaphor as well. When that room was built California cared about kids and education. The people who built that room all those years ago really believed education was important, and that they had to build something bright and beautiful so that their children could learn and contribute to their far better world.

The high ranking employees who sat at the dais last night for the Sierra Madre Summit were not those people, however. Those people are no longer here.

The fix is in on the Sierra Madre City Attorney question

As they say where I come from, "fuggeddabout it." Did I ever tell you that in my first marriage my then very New York wife actually had an uncle named "Sharky?" It is a story I need to tell you someday.

I have spoken with several folks whose opinions I trust, and we are pretty much in agreement. There are now just two law firms still in the running, and one of them is Colantuono and Levin. Given the make up of the current City Council, it is now pretty much inconceivable that C&L is going to be let go. Which means the law firm that helped enable One Carter, the Downtown Specific Plan, the 2010 "Water Rate Process," and the great "suites versus units" debate, will still be with us for a while. We will continue to not receive legal services as much as we will the legalistic enabling of out of town agendas that are not in the interest of Sierra Madre's taxpayers.

This was a noble effort on Chris Koerber's part, but it is going to take one more election to throw C&L out. The pawned element of our current City Council is not likely to disobey orders on this one. After all, they're employees, too. They just don't get paid very much.

http://sierramadretattler.blogspot.com
Posted by The Moderator at 6:00 AM