(Mod: Frequent Tattler commenter Captain Obvious needs no explanatory introduction. Obviously. The Captain often speaks out on this blog about the very special economics of City Hall, a place where the everyday financial pressures of life somehow do not always apply, and the numbers sometimes just don't quite add up. At least in a traditional mathematical sense ... Come join in the fun as the Captain slices and dices city staff's quirky claims regarding the upcoming sunsetting of the UUT. A topic that will be presented at tonight's City Council meeting by the City Manager and other staff types as one of the greatest tragedies of our times. And yet, as Captain Obvious clearly demonstrates below, the numbers just do not justify all of that sobbing.)

The Captain enjoys a good intellectual read, sometimes. And other times, he’d prefer a good laugh. City Hall must be reading the Captain’s mind, ergo, the staff report from tonight’s (7/22) City Council meeting.

If you need a good laugh, read the full staff report – all 10 pages. The Captain loved, yes, loved, Page 2 of 10: “General Fund Comparison of Revenues to Expenditures (in thousands) including Transfers In/Out." 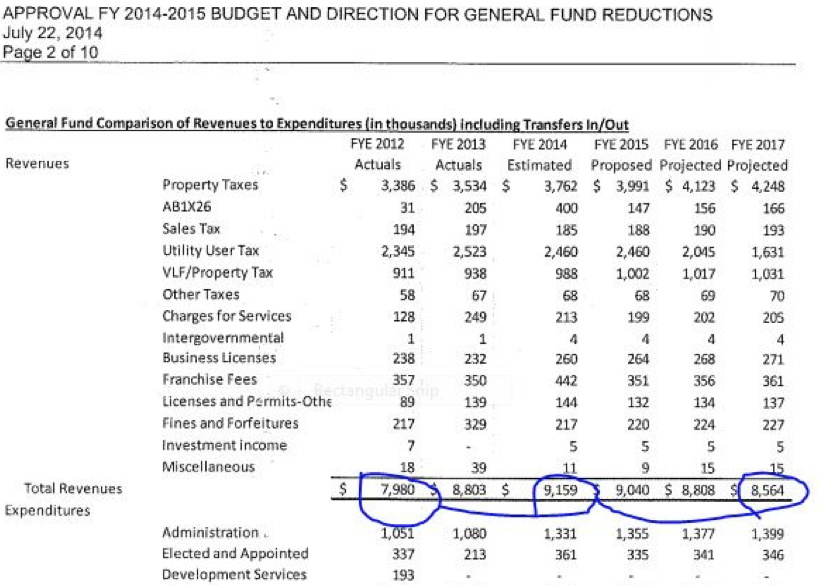 The Captain won’t be attending the meeting this evening, but here are some good questions for lots of people to ask at Public Comment (feel free to have a number of people ask the same question – tell ‘em the Captain sent ya!) Please be sure to pass a copy of your questions to the City Clerk so they can go into the minutes.

Question 3: In the July 17, 2014 edition of the Sierra Madre Weekly, City Manager Elaine Aguilar talks about an estimated $1 million less revenues after July 1, 2016 as the UUT sunset to 6%. Why didn’t she mention the expected $1 million increase in revenues from FY 2012 to FY 2014?

A couple of bonus questions:

Question 5: Please explain how the City projected only about a 6.0% increase in property tax revenues for FY ending 06/30/2015 when at least 64 homes have sold in the last 90 days? That works out to about 240 for the entire year. These sales are not one time things - the increased taxes will continue year after year.

Question 6: Before we added paramedics in 2008, the City got along with a 6% UUT rate that applied to less types of utilities than we pay now. When was the last time (if ever) the City explored having the County provide paramedic services?

The Captain thinks the City’s answers to these questions should be transparent. With your help, we can get the clear answers we deserve.

Mod: Is it just me, or are the three McMansion developers starting to sound just a little bit whiny? Today's Star News article, written by Zen Vuong and called, "Developers not bothered Sierra Madre’s water conservation measures" (link), gives us a bit of palaver from the folks in that corner. People who actually sound, well, kind of bothered.

Here is an example:

Cameron Thornton, spokesman for the Mater Dolorosa Passionist Retreat Center, said the 20 acres of vacant land his ministry hopes to develop into single-family homes is at least three years away from breaking ground. The building moratorium could be extended for a maximum of two years. In fact, the organization has yet to start a property sale process.

“It doesn’t change our need to sell the land to raise funds, that’s for sure,” Thornton said. “We still have the need to care for our aging priests in America and abroad. Quite candidly, it doesn’t change anything. Our biggest hope is that the moratorium will allow the community to come together and have civil exchanges and have honest conversations.”

There you go. Apparently Cameron Thornton believes that the people of Sierra Madre have been uncivil and dishonest on this topic. Probably because so many haven't been seeing things quite his way.

So how civil would it be to subject this community to years of the dirt, noise and pollution of so massive a construction project, and just because the Passionists did not plan properly for the retirement of their people? And isn't that what Thornton does for a living? Retirement planning?

And honestly, how in the world can Cameron Thornton claim with a straight face that "the organization has yet to start a property sale process?"