City To Begin Replacing A 2,500 Foot Stretch Of Water Main This Friday?

The following article was added to the Los Angeles Register website late last evening, and I am posting a portion of it here for you today. Written by their beat reporter for our city, America Hernandez, you can link to the entire piece by clicking here.

About 2,500 feet of underground steel pipe, the concrete lining of which has worn away, will be ripped up to make way for new pipes, fire hydrants and water meters. The repair is expected to take two months.

“Our water main system dates back to the late 1920s and has become almost famously unreliable, as seen by major leakage and significant damage to the street,” said Sierra Madre Public Works Director Bruce Inman.

The project is partially funded by a grant from the Environmental Protection Agency, made available through the 2007 Water Resources Development Act. The federal bill set aside $23 billion for more than 900 nationwide projects and programs, including $25 million for a Los Angeles River revitalization study.

Sierra Madre’s aging water system has been a major concern. After the city began buying water from San Gabriel Valley Municipal Water District in October, some residents noticed their tap water had changed color. The severe drought had depleted local groundwater resources, and the new, imported water, treated with purifying chemicals, reacted with the city’s old steel pipes where the concrete lining had worn out. Rust deposits began flowing through taps, toilets and showers.

Despite its appearance, the rusty water, which ranges from bright yellow to gray-brown, has been deemed safe to drink by city officials.

“The current repair is not likely to have an effect that people will see (in the water) since there are dozens of water mains throughout Sierra Madre that need upgrading,” Inman said. “The primary benefit is fixing something that has outlived its service life.”

Sierra Madre’s long-term plan is to repair water transmission lines one by one as money becomes available, officials said. This is the second main to be replaced but the first to receive funding through the federal bill.

I looked at both the City of Sierra Madre website and Facebook page and could find no notification of any upcoming water main replacements. These projects are a pretty big deal in this town, and as with the East Sierra Madre Boulevard pipe replacement back in 2011, normally given a lot of prior notice. Especially for a traffic bending project that will take up to two months.

I also looked in the Mountain Views News and couldn't find anything there, either. Though their July 26th edition did have the following useful upcoming meeting notifications: 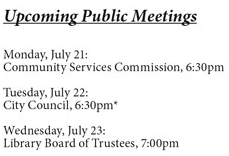 I'm renting a time machine for all three of these get-togethers now. They're not the kinds of meetings you'd want to miss more than once.

So if anyone can tell me where exactly the water main construction starting this Friday is going to be taking place, I for one would like to know. Right now this seems to be something of a mystery, at least for me. Maybe I missed something.

There is this one item (link) from the July 8 City Council meeting that indicates the location could be Mountain Trail. Is that ground zero for this one? And if so, have the residents there been notified? Will there be a press release with details of what is expected to happen?

Perhaps City Hall forgot to tell anyone. You know how busy they get sometimes.

That locally beloved news institution known as The Sierra Madre Tattler passed the 2,500,000 hit mark late last night. A numerical milestone that is quite a robust one for a news site that covers the affairs of one of the smaller burgs in Los Angeles County. And while former Mayor Josh Moran used to famously claim that nobody reads this site, I think that number tells us a slightly different story.

Just so you know, we are currently at 107,908 comments life to date. Also a rather high number. Especially since I believe Josh also used to claim that they were all written by the same three people.

We do have our critics, I suppose.