At Tuesday evening's City Council meeting we heard a discussion on Agenda Item #5, which deals with the sunsetting of our current state highest utility taxes. A distinction that the voters had decided to lose last April.

Titled “FY 2014-2015 Budget: Direction Regarding General Fund Budget Reductions In Preparation For Utility User Tax Sunset,” it was discussed with great solemnity by City Staff. And in order to emphasize the seriousness of this situation, each city department head rose from their seats and one by one approached the public comment podium to share with all of us just how terrible the UUT sunset is going to be for them.

Then our City Manager, and in the most melancholy way possible, detailed what cuts might be made, and with each example took care to outline just how difficult this would be, and how bad it would make things for the City of Sierra Madre. It was a reprise of a very familiar performance from Elaine. Of course, things such as that now famous $37,800 a year health care plan, perhaps the highest of its kind in all the State of California, were not mentioned.

At the end of this discussion an unfortunate situation developed between Councilmembers Delmar and Arizmendi, and a rather truculent Gene Goss. The difference of opinion was over the severity of the effects of the sunsetting UUT, with Councilmember Goss becoming nearly abusive about it. Here is how one reader commented on this set-to:

We here at The Tattler agree with Rachelle and Denise. To say that the survival of Sierra Madre is dependent upon this city charging one of the very few double-digit utility tax rates to be found anywhere in this country is just absurd. The real issue here is whether Sierra Madre is willing to accommodate Los Angeles style benefit and health care packages for its unionized employees, or pay for something that is a little more in line with what a small city of less than 11,000 people can afford. 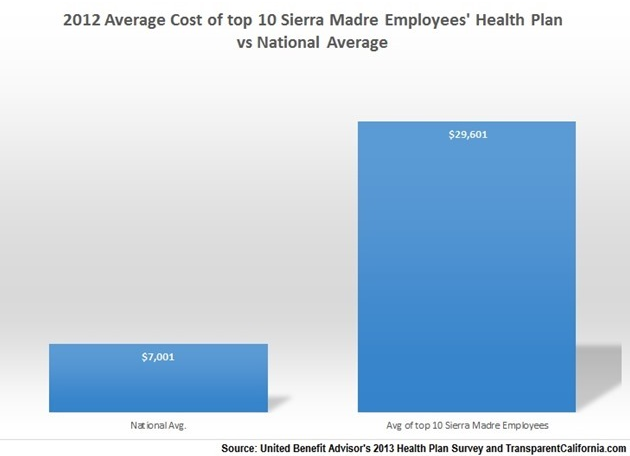 Or, to put it on the Josh Moran coffee scale, the approximate cost of 250,000 grande' cups of Starbucks latte,' with that always essential extra shot added. Only the most callow of coffee parvenus would ever drink their latte' any other way. I'm sorry, but that is just how I feel.

The threat heard loud and often from certain involved persons is that this loss of revenue would lead to such dire consequences as the closing of the Library, outsourcing the Sierra Madre Police Department, and the end to our sweet little arrangement with the Paramedics. Defibrillators and all. In other words, just general chaos, mayhem and some of the milder forms of rioting in the street. With decorum, of course. Please remember where you are.

We here at The Tattler would hate to see any of that happen. We were also tickled pink to see Measure UUT go down in flames. Something that may cause some of those among us to sense a contradiction. But we're not like that. Well, not often.

So, putting pencil to paper, I believe we have come up with a way to have our cake and allow the City to eat some, too. Without wholesale firings, or the streets left wide open to crime and mayhem because we have too few cops.

The above graph was created for us by our friends at TransparentCalifornia.com. Note that the cost of these very generous health, dental and vision care plans we give to our city's Top 10 most benefit enriched employees average a ridiculously high $29,601 a year.

Also note that the cost of such health benefits to the average American citizen is right around $7,000. In our view that is quite a discrepancy.

It is important to note that there would be a potential savings of $226,000 a year if these Top 10 city government employees simply received an average costing health plan. And in a city where we have been forced to accept two water rate hikes in 5 years, a nearly 100% in combined increases, it is an unconscionable amount.

$226,000 a year is a lot of dough in anybody's estimation. Even our City Hall would be impressed by such a figure. But ask yourself this, what if all of those health, dental and vision plans given to our city's somewhat overcompensated employees were brought down to that national average of $7,000 per year? How much money could we save then?

Below is a chart which details the compensation received by our full-time City of Sierra Madre employees. It will enlarge if you click on it. The cost of their health, dental and vision plans are broken out on the right. Those figures are all over the map, as you can clearly see. How this might have happened I am not sure. But there doesn't seem to be much rhyme or reason to it. 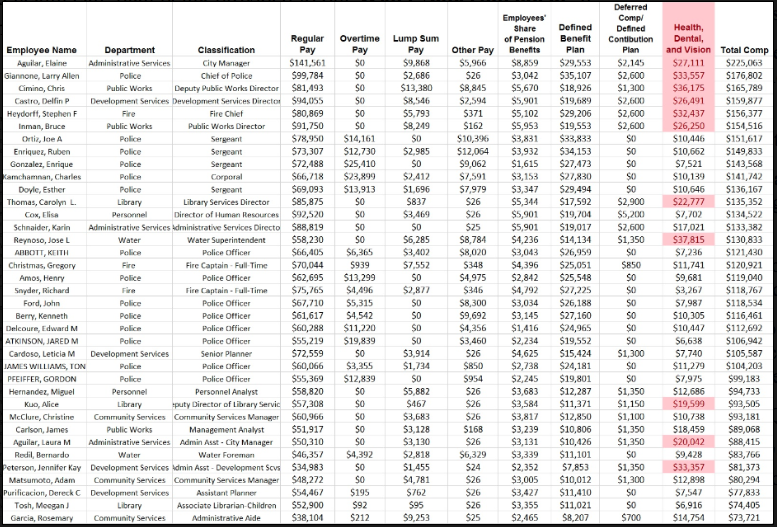 So what we have done here is add up the costs of all of those yearly platinum health care plan costs detailed in the column titled "Health, Dental and Vision." That number comes out to $560,649. Or way more than half of what the City of Sierra Madre will lose every year when our UUT here goes down to 6% in 2016.

What this struggle at City Hall is really all about is saving union negotiated benefits, such as $30,000+ a year health care plans, from the chopping block. Yet by bringing such benefit costs down to the level most tax paying residents of Sierra Madre get, saving city services such as the Library and Police Department becomes possible.

You have to wonder why Councilmember Goss would want to put union issues that he feels are important above the safety and needs of the people of Sierra Madre.